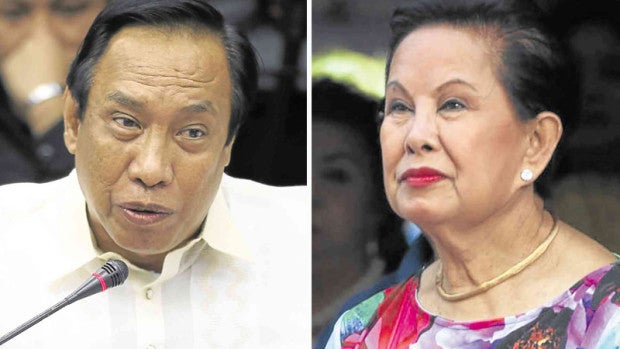 Saying there was no turning back, former Makati City Vice Mayor Ernesto Mercado finally took the witness stand on Wednesday in connection with the P72.06-million graft case against former Makati Mayor Elenita Binay.

“I got rid of the reverse gear of my car and (I’ll be) driving forward,” said Mercado in an interview with reporters following the hearing.

Mercado testified on the Commission on Audit’s (COA) report which found irregularities in the purchase of office furniture and partitions for the Makati City Hall in 1999.

State prosecutors had been wanting to present Mercado as a witness to explain how an original copy of the COA report ended up in his possession.

But Binay’s defense team succeeded in blocking his testimony in 2015, saying he was not in a position to authenticate the report and speak about its factual veracity.

In a July 2015 ruling, the Sandiganbayan Fifth Division originally denied the prosecution’s motion to present Mercado as a witness. But upon appeal, the court subsequently ruled in January 2016 that presenting Mercado was well within the prosecution’s discretion.

The court then said that Mercado was competent enough to testify because he took part in preparing the “management comments” section in which the city government explained its side on the audit observations.

At the Fifth Division hearing on Wednesday, Mercado said he received the audit report in 2002 from then Mayor Jejomar Binay, Mrs. Binay’s husband.

Mercado was a close ally of the Binays until 2010, when they parted ways after Jejomar fielded his son, Jun-jun, in the mayoral race. Mercado lost the race to the younger Binay, and Jejomar went on to become vice president.

After the hearing, Mercado, however, clarified to reporters that his testimony was “not against the Binays.”

“The testimony was about what happened to the COA report. So it’s not proper to say that (my testimony) was against Binay … because we’re not enemies,” Mercado explained.

The case being heard by the Fifth Division is the last surviving graft charge against Mrs. Binay in connection with the purchase of city hall furniture and partitions from 1999 to 2000. Three other criminal cases related to these questioned purchases have been dismissed.

The Second Division last April 7 dismissed the P58.04-million graft case on demurrer, which means that even without rebuttal from the defense, the prosecution’s evidence is insufficient to sustain a conviction.

The Fifth Division, for its part, also granted the demurrer against a separate P21.7-million case against her last Oct. 28. The Fourth Division last Nov. 17 also acquitted Mrs. Binay after a full-blown trial on the P13.25-million graft case.

However, Binay has four other graft and malversation cases pending before the Third Division in connection with a separate case—the purchase of P45 million worth of hospital beds and sterilizers for the city-run Ospital ng Makati in 2000 and 2001.