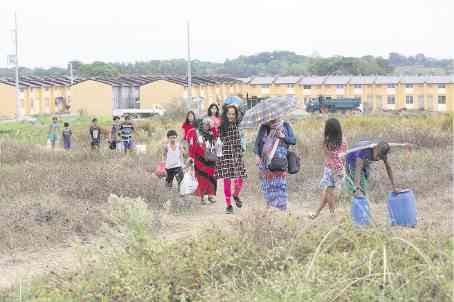 Families belonging to the urban poor group Kadamay pass through a vacant lot on their way to houses they are occupying at the Atlantica housing project in Pandi town, Bulacan province. —JOAN BONDOC

CITY OF MALOLOS—The urban poor group Kalipunan ng Damayang Mahihirap (Kadamay), which led the occupation of idle low-cost houses in Bulacan province three weeks ago, on Wednesday said its members would keep these units for free unless the National Housing Authority (NHA) could explain how the P50 billion for housing projects was spent.

Gloria Arellano, Kadamay chair, said they were told during a Monday dialog that only a small percentage of that amount went to the NHA. The rest of the funds went to agencies that oversee poverty alleviation such as the Presidential Commission on Urban Poor and the National Anti-Poverty Commission.

Kadamay also sought an explanation as to why the housing projects were rushed but had remained unoccupied by their intended beneficiaries, most of them soldiers, policemen and firemen.

But the NHA withdrew the eviction orders after Kadamay agreed to undergo a validation process to determine whether its members would be eligible to own the houses, according to Anakpawis Rep. Ariel Casilao.

Casilao, who took part in the dialog between Kadamay and the NHA, also said Kadamay had agreed to avail of housing loans provided the NHA could relax some of its requirements.

But Arellano said Kadamay and the NHA had yet to agree on payment terms pending the completion of the validation.

“Only the 324 families [who occupied houses] in Villa Elise with whom the NHA initially had talks … apparently agreed to pay the houses they occupied through loans. But that is not the position of Kadamay,” she said.

Some families who occupied the houses on March 8 were unable to acquire units and tried to take over other housing sites in Bustos town.

“This problem with housing has been festering for so long but the people who occupied the idle houses are poor and would not be able to pay for them. We really intend to pursue free housing for them,” Arellano said.

“The P50-billion allotment was for families living near [Metro] Manila waterways, so why haven’t many squatters and urban poor been given houses today?” she said. “These housing projects were rushed … but the units were too small, measuring 22 square meters. That is why beneficiaries like policemen declined offers to stay there.”

The NHA has given the beneficiaries until May 30 to signify if they want to avail of the low-cost houses in Bulacan. Otherwise, the houses will be forfeited and given to families who are eligible under government housing rules, it said. —CARMELA REYES-ESTROPE