WHO warns of measles outbreak across Europe 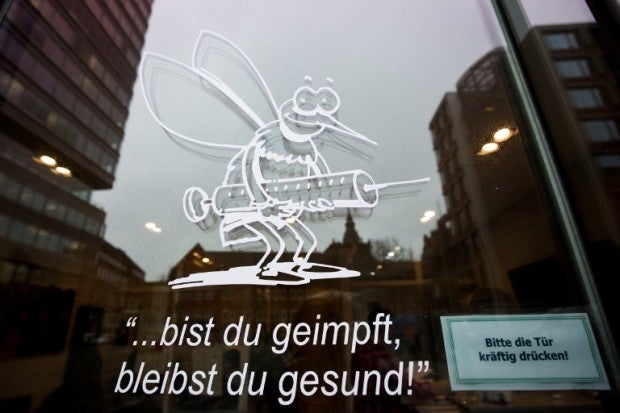 A text reads “you’re vaccinated, you stay healthy” on the door of a doctor office in Hamburg, northern Germany, during Germany’s worst outbreak in years of measles. A toddler has died of measles on February 18 in Berlin, health authorities said on February 23, announcing the first known fatality among more than 500 measles cases since October in the German capital.
AFP

STOCKHOLM, Sweden — The World Health Organization (WHO) warned Tuesday of large measles outbreaks in countries where immunization has dropped, after more than 500 cases of the highly contagious disease were reported across Europe in January.

“With steady progress towards elimination over the past two years, it is of particular concern that measles cases are climbing in Europe,” the agency’s regional director for Europe, Zsuzsanna Jakab, said in a statement.

“Today’s travel patterns put no person or country beyond the reach of the measles virus,” she said.

The respiratory disease, characterized by high fever and small red spots, usually triggers only mild symptoms, but it remains one of the leading causes of death among young children globally.

Severe complications can occur, however, leading to miscarriage in pregnant women, brain swelling or the risk of death by pneumonia.

The virus is spread by coughing and sneezing, and by close contact with infected individuals.

France, Germany, Italy, Romania, Poland, Switzerland and Ukraine were the most affected, accounting for 474 of the 559 cases reported for January.

In these countries, national vaccination levels against the virus are below the 95 percent threshold considered necessary for protecting the entire population.

Preliminary figures for February indicate that the number of new infections is rising sharply, the WHO said.

“I urge all endemic countries to take urgent measures to stop transmission of measles within their borders, and all countries that have already achieved this to keep up their guard and sustain high immunization coverage,” Jakab said.

“Outbreaks will continue in Europe, as elsewhere, until every country reaches the level of immunization needed to fully protect their populations,” she added.

Currently, the largest outbreaks are occurring in Italy and Romania.

The number of measles cases in Italy has tripled this year, largely because parents are not getting children vaccinated because of fears of a link between the combined measles, mumps and rubella (MMR) vaccination shot and autism, the health ministry said last week.

Several major studies, however, have shown no evidence of such a link.

In Romania, a measles outbreak has killed 17 children and infected thousands more since September, the result of both poverty and an anti-vaccination movement, local media reported Saturday.

In poor countries, many people do not have access to the $1 vaccine (94 euro cents), but the WHO has pointed out that children in affluent countries have a greater risk of infection because of skepticism about immunization. CBB