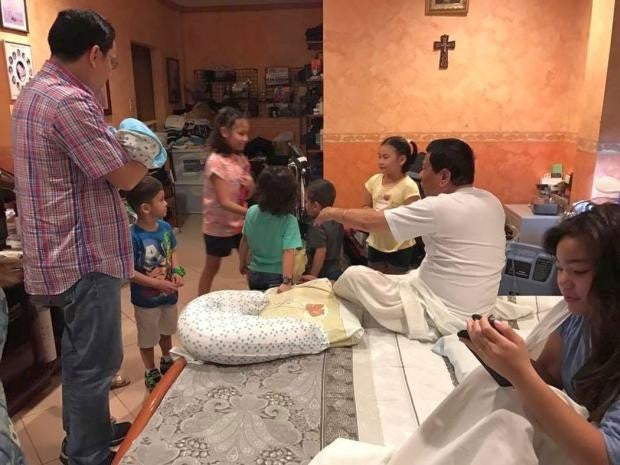 BONDING TIME President Duterte is greeted on his 72nd birthday by his grandchildren in his bedroom at his house in Doña Luisa Subdivision in Davao City. —PHOTO FROM MANS CARPIO’S FACEBOOK

DAVAO CITY — They came bearing gifts and words of support.

On the eve of his 72nd birthday, President Rodrigo Duterte spent the day in Davao City meeting with ambassadors from China, the United States and Hungary who pledged support and good ties.

It was private time for the President, according to the Presidential Communications Operations Office in Davao City.

Christopher Go, head of the Presidential Management Staff, said the President did not have any official schedule for Tuesday.

Mr. Duterte was still sleeping past 3 p.m. on Tuesday when his grandchildren arrived at his house in Doña Luisa Subdivision.

They went straight to his room and woke him up to greet him.

The President then busied himself accepting visitors at the Presidential Guest House in Davao City.

On Monday night, Chinese Ambassador Zhao Jianhua came to visit. He presented the President with two paintings for his birthday.

One of the paintings was based on a Malacañang photo released in December that showed Mr. Duterte, partner Honeylet and daughter Veronica during a Christmas party at the Palace. Behind them was the seal of the Office of the President.

The painting showed a smiling Mr. Duterte with his left hand touching Honeylet’s cheek and her right arm draped over his right shoulder.

The other painting  depicted a rooster.

Zhao and the President discussed matters of mutual concern, including how to resolve disputes in the South China Sea.

Another visitor on Monday was US Ambassador Sung Kim, who assured the President that the United States understood the Philippines’ security concern and was willing to provide more military equipment, assistance and training, according to presidential spokesperson Ernesto Abella.

Abella said Kim also told Mr. Duterte that he was proud of the cooperation between the US and the Philippines’ intelligence forces when it came to sharing information, and supporting the provision of training and equipment.

Mr. Duterte, for his part, assured the US ambassador that the relations between their countries “remain strong and there is readiness to discuss more matters of mutual interest with the US,” Abella said.

According to Kim’s Twitter post, he and the President had a “terrific discussion” and a “strong agreement on our countries’ shared values and interests.”

Their conversation focused on the United States and the Philippines’ years of extensive bilateral partnership as well as cooperation in counterterrorism, child protection, piracy and economic development in Mindanao.

Kim cited US-Philippine joint efforts to strengthen the economy and promote peace and stability in Mindanao.

Washington has pledged more than P3.5 billion for projects in the region to be undertaken in the next few years, including a roll-on, roll-off ferry service, which is aimed at helping both American and local businesses in Mindanao increase exports at low cost.

Kim said that by the end of April, the ferry would connect Davao and General Santos Cities with Bitung in Sulawesi Island, Indonesia.

Hungary’s Minister Szijjarto came to see Mr. Duterte to inform him that his country shared a common vision with the Philippines in the fight against terrorism and illegal migration.

Hungary, which would soon reopen its embassy in the country, is set to boost economic ties with the country through business-to-business contacts, agriculture cooperation, and exchange of technologies.