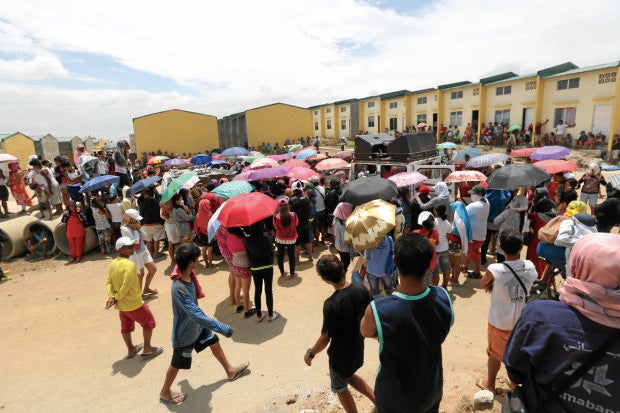 Settlers gather at the Atlantica housing project in Pandi town, Bulacan province, to get updates from their leaders on the status of their stay in the government-owned site. —JOAN BONDOC

CITY OF SAN FERNANDO—When members of the urban poor group Kalipunan ng Damayang Mahihirap (Kadamay) occupied six housing projects in Pandi town and the City of San Jose del Monte in Bulacan province on March 8, they managed to call attention to how the National Housing Authority (NHA) was doing its job.

Kadamay initiated the biggest propoor campaign yet by leading the forcible occupation of 5,262 low-cost housing units that lasted for 12 days.

But it was the absence of explanations—as to why the houses at Padre Pio, Villa Louise, Pandi Heights 2 and 3, Villa Elise and San Jose Heights were idle—that drowned out government outrage at the boldness of Kadamay’s “occupy Bulacan” initiative.

The NHA is the sole agency tasked to produce shelters for 1.5 million homeless families.

But the housing backlog has ballooned to 5.56 million and homeless families have grown at a rate of 3.4 percent annually, based on an estimate of the National Economic and Development Authority.

The NHA website does not provide specific data on resettlement and other programs. Neither does it show the status of its central databank (Alpha Listing), which the Commission on Audit (COA) considers crucial in preventing the multiple awarding of houses.

According to COA reports, the NHA has grappled with the problems of filling up empty houses, stopping illegal occupancy, selling or leasing units, and collecting arrears from settlers in government resettlement sites.

In a 2014 audit, the NHA traced the problem to the delayed submission by a joint housing board for the Philippine National Police and the Armed Forces of the Philippines of its list of beneficiaries and to which houses they would be assigned.

The beneficiaries from the uniformed services also detested the “squatter treatment of men in uniform,” referring to the design of houses, according to the Crispin B. Beltran Resource Center.

It was the AFP/PNP housing board that selected the builders through contracts financed using the community initiative approach instead of undergoing public bidding, the COA said.

What the board ended up approving was the scheme to uniformly build 22-square-meter houses on 40-square-meter lots, each worth P240,000 and payable in 30 years.

Government provides a subsidy of P35,000 in this setup. The same cost is borne by jobless and homeless urban dwellers.

The COA advised the NHA to monitor the status of occupancy, devise a plan to increase occupancy and identify the factors contributing to low occupancy or nonoccupancy of these units.

Resettlement sites that are far from urban centers are known to have low occupancy.

The NHA does not have a role in choosing the locations for social housing because its land acquisition and land banking powers have been minimized since the 1990s, according to a 2012 study.

The study said the terms of reference used by the NHA in developing affordable houses had “no criteria on accessibility of site to employment centers or employment availability in the area.”

“Neither are there criteria on access to existing social facilities. One possible reason for this is that the resettlement program is designed to address this concern through the construction of social facilities (schools, health centers) as well as livelihood facilities or programs,” said the study made by Marife Ballesteros and Jasmine Egana of the Philippine Institute of Development Studies.

There are no consolidated data on illegal occupancy or unauthorized lease or sale. The COA found such incidences at Ninoy Aquino Pilot Community II in Pasig City and at Kasiglahan Village in Rodriguez town in Rizal province.

Amortization arrears grew to P642.46 million as of 2013 because the NHA did not “strictly enforce the stipulation of the conditional contract to sell regarding the automatic cancellation of contracts in cases where the vendee is in default for three monthly installments,” as required by the agency in 2011.

The NHA office in Central Luzon, which covers Bulacan, posted the highest arrears at P200.67 million, followed by its office in Northern Luzon at P197.89 million.

“The monthly amortizations of these vendees are minimal and affordable but they have neglected their obligations to the office,” the COA said.

“The vendees’ failure to pay their obligations does not only breach the contract they have entered into with the NHA or the noncollection thereof deprives the government on the use of funds that should have been derived from their payment,” it said.

By 2014, the COA said 70,195 accounts worth P1.904 billion were not canceled in spite of the fact that these housing beneficiaries were already in arrears ranging from more than three months to five years.

Outside Metro Manila, Bulacan has also the biggest number of accounts at default or 10,173 accounts with accumulated debts totaling P315.64 million.

The production of socialized housing is largely undertaken by the NHA through private developers it has accredited.

Ballesteros and Egana suggested that local governments should be given bigger roles in the resettlement program so that the NHA could “disengage itself from resettlement programs and focus on community development, both for pre and postresettlement, collection and loan recovery, and monitoring and evaluation of projects.”

The NHA has its hands full. Aside from producing shelters for government employees as well as informal settlers living in danger zones in Metro Manila, the NHA was the lead agency in overseeing the construction of disaster-resilient homes after Supertyphoon “Yolanda” (international name: Haiyan) in 2013.

The COA has not determined the extent of corruption at the NHA. It saw haste because several contractors proceeded with the housing projects with incomplete documents.