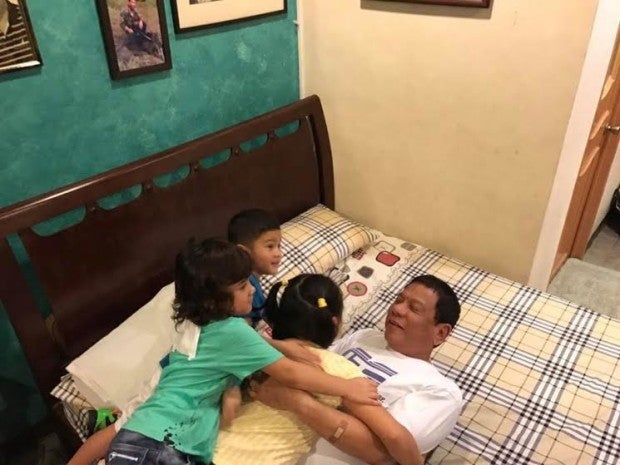 President Rodrigo Duterte is roused from sleep by his grandchildren who greeted him on his birthday on Mar. 28, 2017. (Photo from the Facebook page of Duterte’s son in law, Mans Carpio.)

DAVAO CITY – On his 72nd birthday, President Duterte was nowhere to be found.

The Presidential Communications Operations Office here said the President decided to enjoy his private time with loved ones as he had wished.

Christopher Go, head of the Presidential Management Staff, said the President did not have any official schedule for Tuesday.

Last year, there were no parties for the then presidential aspirant.

Go, who was then Duterte’s executive assistant and sortie manager, said Duterte spent his day at home, resting.

But on Monday (Mar. 27), the eve of his birthday, the President was busy accepting visitors at the Presidential Guest House here.

The President also met with Moro National Liberation Front founding chair Nur Misuari, who was with his wife Tarhata and son Abdulkarim.

On Monday evening, he met with Chinese Ambassador to the Philippines Zhao Jianhua, who gave him a birthday gift — a painting of him and his partner Honeylet Avanceña and their daughter Veronica.

On Tuesday, President Duterte spent his birthday leave just as he had wished and just as he had done in previous years.  He took the opportunity to catch up on sleep.  But at 3 p.m., Tuesday, his grandchildren arrived in his house in Doña Luisa Subdivision in Davao City, went straight to his room and woke him up on his birthday.

In photos posted on the Facebook page of his son-in-law, Mans Carpio, the Chief Executive was all smiles as his daughter, Veronica “Kitty” Duterte and his grandchildren gathered around him for conversation.  Carpio also brought the President’s youngest grandchild, the newly born Marko Digong Carpio, nicknamed Stonefish.  SFM/rga 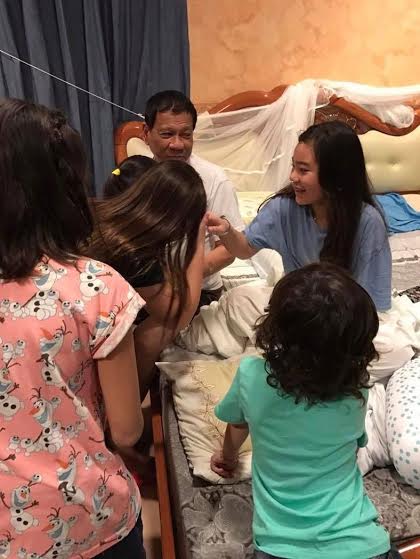 President Duterte’s daughter Kitty (in blue shirt) and his grandchildren gather around him on his birthday, Mar. 28, 2017. (Photo from Mans Carpio’s Facebook page) 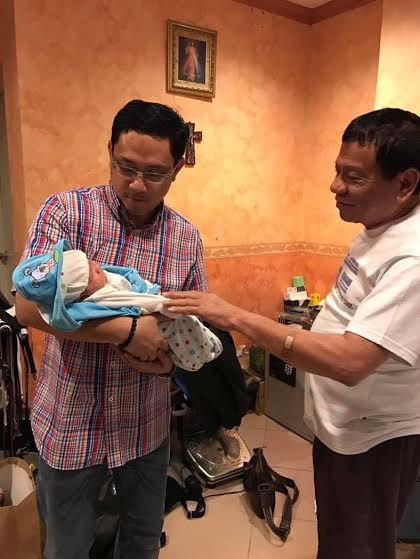