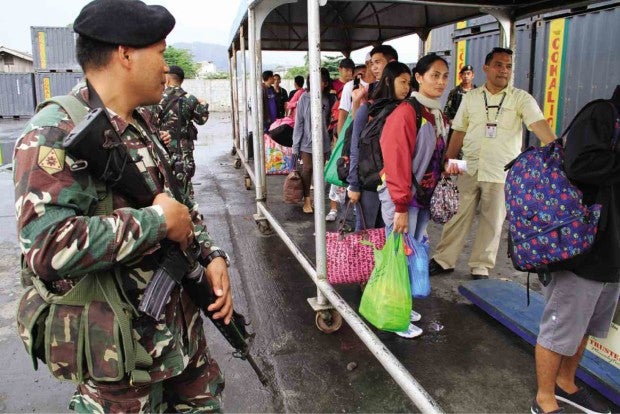 TAGUM CITY, Davao del Norte – The military denied on Tuesday allegations it was behind the killing of three farmers in Laak, Compostela Valley, even as it dared its accusers to file charges.

Maj. Ezra Balagtey, spokesperson of the military’s Eastern Mindanao Command (Eastmincom), said government troops could not have been behind the murder of farmers Cora Lina (not Molina as earlier reported), and couple Arman and Arlyn Almonicar, as “it is the mandate of the military to protect innocent civilians.”

The victims, all members of the militant Nagkahiusang Mag-uuma sa Laak (United Farmers of Laak or Namulak) were gunned down by suspected agents of the Philippine Army’s 60th Infantry Battalion late on Monday, said Jay Apiag, spokesperson of Karapatan Southern Mindanao.

The 45-year-old Lina was shot dead by an unknown assailant at her house in Kibaguio village around 3 p.m., Apiag said.

Some four hours later, the Almonicars were shot dead by unidentified attackers near their home in Purok (Community) 2, Bollukan village, he added.

He said Lina had been receiving threats from the military and had been summoned many times to the 60IB camp.

“She had also been vilified as a sympathizer of the (New People’s Army),” the rights group spokesperson said.

Balagtey lamented that Karapatan conveniently accused the military of the murders “without even providing proof or evidence.”

“It is our duty to protect the people and that killing innocent civilians is a criminal act,” the regional army spokesperson said.

Maj. Michael Candole, 60IB executive officer, said they had no knowledge of the killings.

He said the military could not have done that “because our job is to protect lives and property.”

“We even gave medical attention to wounded NPA rebels captured during encounters. Killing civilians is for terrorists and traitors. It could be the handiwork of the rebels themselves,” Candole said.

Apiag said they have documented 16 cases of political killings in Southern Mindanao under the nine-month old Duterte administration.

“And none of these cases was acted upon or investigated,” he said.  SFM/rga