Supporters of the New People’s Army (NPA) on Monday staged a lightning rally in Cubao, Quezon City, to mark the 48th founding anniversary of the armed wing of the Communist Party of the Philippines (CPP).

At the rally, underground revolutionary organizations in Metro Manila under the banner of the CPP called on Filipinos to join the NPA.

The founding anniversary of the NPA is on March 29.

CPP-NPA leaders on Saturday said they were set to declare a unilateral ceasefire before March 31, ahead of the resumption of peace talks with the government next month.

The CPP expects the Philippine government to declare a similar unilateral ceasefire as part of an agreement reached during back-channel talks from March 10 to 11, the group said in a statement.

Negotiators from both sides agreed on March 12 to resume formal peace negotiations in The Netherlands from April 2 to 6, a month after an angry President Duterte canceled talks because the NPA ambushed soldiers and unilaterally ended a previous ceasefire.

Mr. Duterte, in an interview on Saturday with reporters in Bukidnon province, said he would consult with the country’s political and security leaders “whether it would be good at this time” to resume the government’s unilateral ceasefire.

In the statement, the CPP urged the President to order the military to “slow down its ongoing all-out offensive military operations and aerial bombing and shelling campaigns against rural (communities), to help create a favorable atmosphere for the mutual ceasefire.”

To give the peace talks a boost, the CPP said it also expected the government to release 19 elderly and sick political prisoners, as well as five detained consultants of its political arm, the National Democratic Front of the Philippines.

The CPP said the NPA released on Friday two “prisoners of war” in Mati town in Davao Oriental province, as a “confidence-building” measure and would also set four more prisoners free. 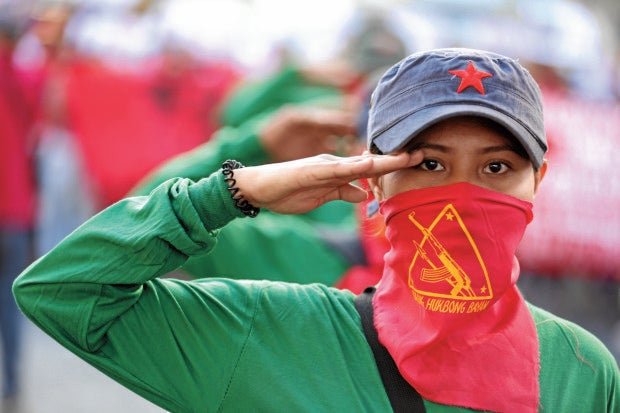 RED SALUTE A woman member of the communist underground movement joins the rally in Cubao, Quezon City, to celebrate in advance the founding anniversary of the New People’s Army, which was established on March 29, 1969. —NIÑO JESUS ORBETA

The conflict between the government and the communists has raged for nearly five decades and killed more than 40,000 people.

Both sides in the conflict unilaterally declare ceasefires that the opposite party typically accuses the other of violating, leading to a fragile peace in the conflict zones where the rebels operate.