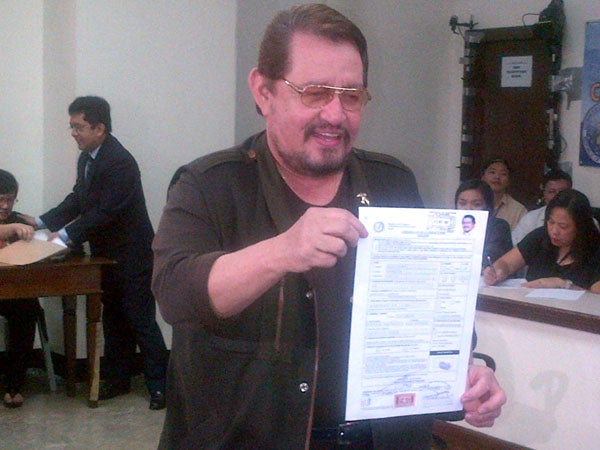 Former Puerto Princesa mayor Edward Hagedorn on Monday posted a P180,000 bail for perjury, graft, and ethical breach charges for his alleged false declarations of wealth in his Statement of Assets and Liabilities Networth (SALN).

The media were not able to go near Hagedorn, who was surrounded by bodyguards in  posting of bail at the Sandiganbayan.
Hagedorn posted bail ahead of the Sandiganbayan Fifth Division’s finding of probable cause to hold him on trial.

READ: Hagedorn charged with perjury over false SALN declarations
The Office of the Special Prosecutor filed nine counts each of perjury and graft against Hagedorn for his failure to declare 59 residential, agricultural, and commercial properties, as well as 45 vehicles (including motorcycles, luxury vehicles such as Volvo, Toyota Landcruiser, BMW, and other sports utility vehicles).
READ: Hagedorn faces perjury charges for alleged false SALN declaration

Besides  graft and perjury, the prosecutors also filed nine counts of violations of Section 8 of Republic Act 6713 or the Code of Conduct and Ethical Standards for Public Officials and Employees, for his non-filing of truthful SALNs.

According to the charge sheet for nine counts of violations of Section 7 of the anti-graft law, Hagedorn “unlawfully and criminally failed to truthfully and accurately declare in his SALN the real properties, motor vehicles and corporate/business interests that he in fact owns” for the years 2004-2012.

Hagedorn “concealed information about his ownership of real and personal properties by failing to accurately declare them in his SALNs,” the Ombudsman earlier said in its indictment of Hagedorn.

“(A)n examination of respondent’s SALN from 2004 to 2012 would reveal that, during the said years, he declared only three real properties located in Puerto Princesa City and one real property located in Parañaque City as his own… (B)y any standard, the disparity between the number of realties registered in respondent’s name and that declared in his SALNs is too significant to be dismissed,” the Ombudsman said.

Public officials are required to submit truthful and accurate SALNs according to Republic Act 3019 or the Anti-Graft and Corrupt Practices Act, and Republic Act 6713 or the Code of Conduct and Ethical Standards for Public Officials and Employees.

Failure to declare a truthful statement of wealth is punishable with a five-year imprisonment and/or a fine not exceeding P5,000 according to Republic Act 6713.

Meanwhile, a person commits perjury by deliberately making an untruthful statement in a document required by law to be sworn before any public officer, the Ombudsman said.

Read Next
3 suspected sex traffickers nabbed in Lucena
EDITORS' PICK
Villar Group gears up for AllValue Shopping Party on Dec. 3; around P 1-million promos and discounts up for grabs
Metro Manila to remain under COVID Alert Level 2 until December 15
Omicron poses ‘very high’ global risk, countries must prepare–WHO
IATF tightens border control, suspends entry of fully vaxxed nationals from ‘green’ countries
A delightful blessing!
Legarda: Ending Violence Against Women, a cause for all
MOST READ
Quiboloy warns of ‘much worse than Omicron virus’ if his ‘persecution’ is not stopped
Omicron poses ‘very high’ global risk, countries must prepare–WHO
Marcoleta defends pol ads on ABS-CBN
Bongbong Marcos’ conviction in tax case not a crime involving moral turpitude — lawyer
Don't miss out on the latest news and information.