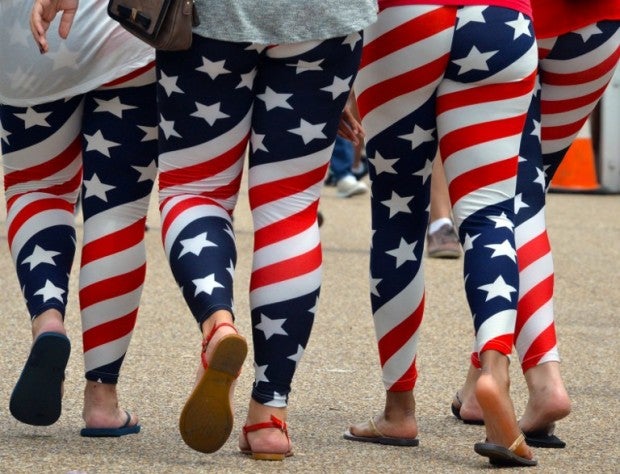 Four young women wear US flag leggings marking the Independence Day as they walk on Pennsylvania Avenue in Washington, DC on July 4, 2015. United Airlines is drawing flak on social media after it reportedly barred two girls from boarding a flight for wearing leggings AFP

WASHINGTON — United Airlines found itself at the center of a social media storm after it barred two girls from boarding a flight in Denver on Sunday because they were wearing leggings.

Another girl who was also wearing leggings was allowed to board the flight from Denver International Airport to Minneapolis after she changed, a witness said.

The incident was reported on Twitter by Shannon Watts — founder of fun reform group Moms Demand Action — who was a passenger at the airport waiting to board another flight to Mexico.

READ: What Your Athleisure Game Says About You

“She’s forcing them to change or put dresses on over leggings or they can’t board,” she said. “Since when does @united police women’s clothing?”

“A 10-year-old girl in gray leggings,” she added of one of the girls. “She looked normal and appropriate.”

However, United Airlines maintained its support for the gate agent’s decision in its own series of tweets.

Later, it clarified that the girls prevented from boarding were “pass riders” — those who fly free or at heavily reduced rates because they are airline employees or their relatives.

“Our regular passengers are not going to be denied boarding because they are wearing leggings or yoga pants,” a spokesman told The Washington Post.

“But when flying as a pass traveler, we require pass travelers to follow rules, and that is one of those rules.”

That didn’t stop a tsunami of ridicule against the airline on social media for what critics called sexist and intrusive actions.

Model Chrissy Teigen weighed in: “I have flown united before with literally no pants on. Just a top as a dress.”

“Next time I will wear only jeans and a scarf,” she added. CBB/rga