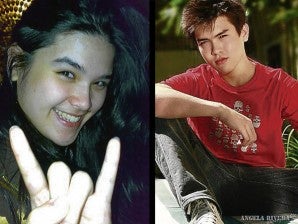 TURNAROUND. Ramona Bautista changed her story on her abduction which raises more questions like why she was seen in a mall 3 hours after the attack. Police want to know why she didn’t go to nearest precinct to report the crime. Her younger brother RJ Bautista (right) is now in jail. PHOTO FROM HTTP://ALIWANAVENUE.WORDPRESS.COM/FACEBOOK PAGE OF RJ’S MOVIE “FIDEL”

One of the suspects in the killing of actor Ramgen Bautista left for Hong Kong on Friday evening, two airport sources told the Inquirer.

Maria Ramona “Mara” Bautista, a younger sister of Ramgen, boarded Cathay Pacific Flight CX 902 bound for Hong Kong at around 9 p.m., according to an official at the Ninoy Aquino International Airport, who requested anonymity.

Immigration authorities said that although they are aware of Ramona’s alleged involvement in the killing, they explained they could not stop her from leaving because no “hold-departure order” or any court order had been issued against her.

Ramona, with her head partly covered by a scarf, was reportedly escorted by a man at the departure area of the Naia Terminal 1 around 6:20 p.m., said another source, who declined to be identified because he was not authorized to speak to the media.

“We are shocked as everyone else about this report,” Alde Pagulayan, a spokesperson for the office of Sen. Ramon Revilla Jr., half-brother of the slain Ramgen, told the Inquirer.

Part of a statement issued by the senator’s family  said: “She has never been under the custody of Senator Revilla Jr. even after he took her from the Parañaque police station last Oct. 29. Ramona was at the wake of Ramgen for 2 days and did not go there any longer and did not even attend the funeral of her brother. There had been no contact with her since then. This is a police matter and in their hands more than ever.”

Ramona had been tagged by Ramgen’s girlfriend as one of those allegedly involved in the murder.

The Philippine National Police (PNP) is standing by the findings of the Parañaque police in the case involving the murder of Ramgen (Ram Revilla in show biz).

Responding to doubts raised by the Bautista-Revilla family on the police investigation that linked the slain actor’s two siblings, Ramona and Ramon Joseph “RJ”  Bautista,  to his murder, the PNP spokesperson, Chief Supt. Agrimero Cruz Jr., said the probe conducted by the local police had been based purely on evidence.

Asked whether the PNP leadership was satisfied with the inquiry and would stand by it, Cruz said: “Yes, with malice toward none and justice for all.”

He also said the PNP would not mind a reinvestigation as proposed by the Bautista-Revilla family.

But that is only “if the prosecutor orders [it],” he added.

On Oct. 28, Ramgen and his girlfriend Janelle Manahan were attacked by a masked assailant wielding a gun and a knife in the family residence at BF Homes subdivision in Parañaque City.

Ramgen was killed, but Manahan survived.

On the strength of the statements of witnesses who claimed to have known of the murder plan, Parañaque police tagged Ramgen’s siblings RJ, 18, as the mastermind, and Ramona, 22, as one of the accomplices.

But the family expressed disbelief that the two siblings could be involved in the murder of their brother.

Seen at a mall

Ramona on Friday recanted her claim that her brother’s killers had abducted her. But the Parañaque police said her turnaround had raised more questions on her recollection of the crime.

“If the crime was committed at around 10:30 p.m. on Friday (Oct. 28), how come she was seen at a Las Piñas mall at around 1:35 a.m. on Saturday?” said Chief Insp. Enrique Sy, the head of Task Force Ramgen. “Why did she not go directly to the nearest precinct? There’s one inside BF Homes.”

According to Sy, Angcahas told police that he saw Ramona and RJ leave the house and assumed that the two were heading to Baguio City, where the family was to visit a brother who was just admitted to the Philippine Military Academy.

In a phone interview aired on TV, Ramona said she was “in shock” when she told authorities on Oct. 29 that she was abducted and dropped off, unharmed, at a mall on Alabang-Zapote Road.

She said she had actually driven away from the house as soon as she could, fearing for her life as she thought her brother’s assailant was still in the area.

But Sy, who listened to Ramona’s interview, said: “What happened to her car? Why was she walking?”

Senior Supt. Billy Beltran, the Parañaque chief of police, said he was not able to catch the on-air interview.

He begged off from saying how Ramona’s testimony could impact the complaint filed at the city Prosecutor’s Office against her, RJ and five others.

Beltran refused to comment further on the merits of the case, saying: “Let’s just wait for the prosecutor to decide on the issue.”

He said the results of the forensic examination on the evidence collected from the crime scene were expected to be released in the coming days.

He also said police were optimistic that they could retrieve the gun and knife used to kill Ramgen Bautista and wound Manahan.

Quoting statements gathered from witnesses, Sy said the house help of the Bautistas heard Manahan’s cries after the attack.

However, he said, police and barangay watchmen learned about the attack from one of Manahan’s friends who alerted authorities through Hotline 117.

The wounded Manahan managed to send text messages to people she knew and sought assistance from them, Sy said.

Quoting from the eyewitness account of Manahan, Senior Superintendent Beltran said that she asked Ramona to call for an ambulance but the latter left without saying a word and never came back.