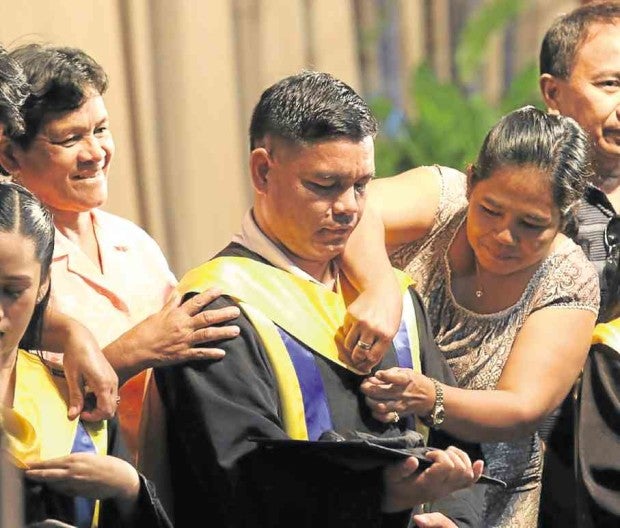 Erwin Macua recieves his graduation hood and cap from his mother and wife Erenia.—JUNJIE MENDOZA

CEBU CITY—Erwin Valmoria Macua’s struggle to get a college degree could have been just another story about how hard work could make dreams come true.

Except that Erwin worked his way to college while on duty as a security guard at St. Theresa’s College (STC) here where he finished a Bachelor of Elementary Education (BEEd) degree with honors.

“I am still on cloud nine,” said Erwin, who was still on duty that day, hours before he took part in graduation rites at 3 p.m.

Erwin couldn’t skip work although he should have spent the day preparing for his graduation. “It’s no work, no pay,” he said.

The work arrangement, however, gave Erwin income that he said helped him finish college and finance his family’s needs.

Erwin’s march on the stage to get his diploma was unforgettable for him because of the jitters. He said he felt nervous knowing his wife and three children were watching as he got his diploma.

Getting a college degree was a dream Erwin clung to even after being forced to drop out of Divine Word College of Tagbilaran (now Holy Name University) where he had enrolled in a civil engineering course.

In 1999, Erwin had to drop out of the civil engineering course when his parents, who owned a small farm in their hometown in Trinidad, Bohol province, ran out of money to continue sending him to school.

Erwin would find himself in Cebu City looking for a job and finding one as security guard with the help of an uncle, who is also a security guard.

He was assigned to STC. He had married but still dreamt of college.

Erwin saw the chance to fulfill his dream when STC became a coed institution in 2013.

He enrolled in BEED, a course which he said he could use to inspire the young to change their lives through education.

Things started to fall into place for Erwin. Worrying about where to get the P20,000 to P36,000 in tuition needed per semester, Erwin was told he could avail himself of a 50-percent discount because he worked at the school.

“Who could refuse such offer? This is a dream come true for me,” he said.

The next obstacle would come in the form of schedule. But Erwin leapt over that, too.

While on duty from 7 p.m. to 7 a.m. at STC, Erwin kept a full load in his course. Erwin attributed it to time management. It simply meant him doing school work after his duty, which left him only Sundays to spend with his family.

But bonding time with family was often spent on school work that he brought home and on which his family helped. “I thank them for understanding,” Erwin said of his family’s support for his college stint.

He did not let having much younger classmates bother him. He was consistently on the dean’s list.