Duterte to poor: ‘If you die, I’m sorry’ | Inquirer News

Duterte to poor: ‘If you die, I’m sorry’ 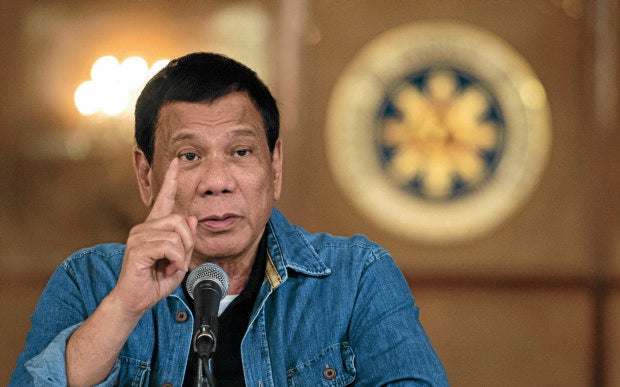 Using this logic, President Rodrigo Duterte on Saturday justified the deaths of hundreds of suspected users and pushers, all from poor families, in his war on drugs.

“If you die, I’m sorry,” Mr. Duterte said in a speech at the Kaamulan Festival here.

He said he could not do anything if those who get killed in the war were poor.

“You would say they are only killing the poor people,” the President said.

“Well, I am sorry. I have to clean up until such time the drug lords are eliminated from the streets,” he said.

He said the poor could not use their poverty to justify drug use or selling drugs.

“You claim to be poor? That’s not an answer,” the President said, addressing himself to the poor.

He also said it was only his critics who said only the poor were killed in the war on drugs.

“I did not hear that a son of Lucio Tan or Gokongwei sold drugs,” he said, repeating what he had earlier said about believing that the rich did not need to sell drugs to earn a living, and as such could hardly be a suspect sector in the antidrug campaign.

“Most of them are poor,” he said, repeating another of his earlier statement that he believed only the poor were driven to sell drugs.

Mr. Duterte said the war on drugs sought to eliminate users and pushers from the equation because no drug lord will “cook  ‘shabu’ (methamphetamine hydrochloride) if there were no runner, users and pushers.”

But the President insisted that those who had died in the war on drugs were not executed but had put up a fight.

“I did not order the killing of defenseless individuals,” he said in his speech.

He said that in his 23 years as mayor of Davao City, users and pushers were killed because they resisted arrest violently.

“I did not order anyone to kill anybody who had surrendered or who was on bent knees,” said Mr. Duterte.

“That’s baloney. I’d rather see him in a tightly packed prison where he will suffer more for his sin to the Filipino people,” he said.

He also refuted reports that over 1,000 individuals were summarily executed in Davao City during his stint as mayor.

“Seven hundred, 800 killed because of clash with the police, that’s more accurate,” he said, adding that he was willing to make an inventory in the presence of critics if need be.

The President said criminality was a big problem in Davao City, which prompted him to warn criminals not to destroy his city.

“Now that I am President, I say, do not destroy my country,” he said.

He repeated a claim, without saying where he got the figures, that at least 4 million Filipinos are now hooked on drugs.

“I have to clean the streets because who else will answer for the criminality?” he said.

“Who would stand up for the innocent victims killed by robbers?” he added.

“Even if only half of the four million (drug addicts) went crazy, crimes like theft, robbery and killings would be everywhere, rape, too,” he said.

Mr. Duterte also warned that more people will die if the drug trade did not wane.

He said he did not distinguish between users and pushers.

“Users are pushers, too, because they need to sustain the vice,” he said. —JIGGER JERUSALEM