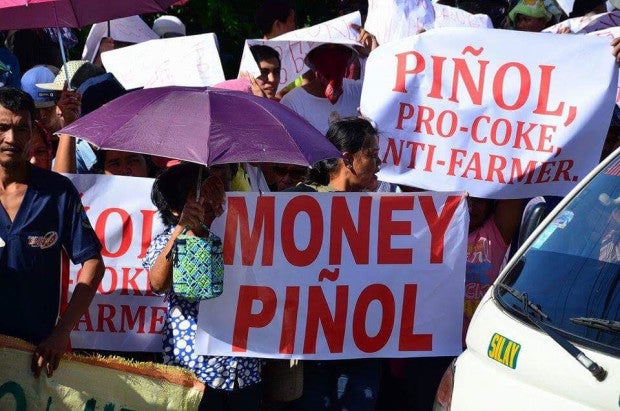 Bacolod City sugar workers protest in front of a Coca-Cola plant on March 20, 2017, against the multinational firm’s use of high fructose corn syrup instead of Philippine sugar. ANDY ALVAREZ / INQUIRER VISAYAS)

Wennie Sancho, secretary general of the General Alliance of Workers Associations (GAWA, announced the declaration at a press conference in Bacolod City on Friday, attended by the leaders of 15 labor groups in Negros Occidental. GAWA claims 10,000 members.

The resolution also calls for the resignation of Piñol.

“He does not deserve to stay in his position for being anti-worker, anti-people and anti-poor”, the resolution said.

Sought for comment, Piñol told a broadcast interview that the workers were free to do what they wanted.

“Let them do it. That’s their call”, Piñol said over ABS-CBN.

The groups issued the resolution over a social media statement by Piñol who said farmers and workers who joined the March 20 rally at the Coca-Cola plant in Bacolod City to oppose its use of High Fructose Corn Syrup (HFCS) were well-funded.

READ: 6,000 protest in Bacolod vs Coca-Cola’s shunning of PH sugar

“This is an insult to the dignity of all workers in the sugar industry,” the resolution said.

They claimed that Piñol chose to defend the interest of multinational beverage firms that use HFCS over the interests of farmer-workers in the sugar industry.

“This is inconsistent with Piñol’s mandate to protect the economic interest of the farmer-workers in the sugar industry,” the resolution said.

When Piñol declared that he wanted to scrap Sugar Order No. 3 that regulated the importation of HFCS, Sancho said the workers were dismayed.

“It seems that Secretary Piñol is not aware of the disastrous economic consequences that shall occur if the sugar industry will collapse. The sugar workers and their families will be suffering in hunger and poverty because they are all dependent on the sugar industry as their means of livelihood,” the resolution said.

The resolution also said Piñol‘s “Mekanikong Magsasaka” program aimed at turning migratory workers into service providers was aimed at making himself look like the knight in shining armor to liberate the sugar workers from poverty.

However, the program is not applicable in the sugar industry, considering that 80 to 90 percent of the sugar farms are owned by small farmers and agrarian reform beneficiaries.

“The program is a good cover story to skirt the vital issues on the importation of HFCS,” the resolution said. CBB