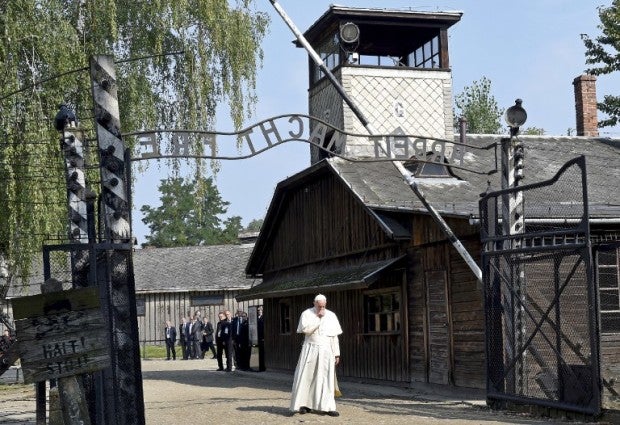 This file photo shows Pope Francis walking through the entrance of the former Nazi death camp of Auschwitz on 29 July, 2016. Some 1.1 million people, mostly Jews, were exterminated at the camp from 1940 to 1945. AFP

WARSAW, Poland — Eleven men and women in their twenties on Friday slaughtered a sheep and took their clothes off at the former Nazi German death camp Auschwitz-Birkenau, according to police and the museum at the site in southern Poland.

The individuals aged 20 to 27, whose identities and motives are unknown, then chained themselves together in front of the camp’s infamous “Arbeit macht frei” (“Work makes you free”) gate, the museum said in a statement.

They also used a drone to film the incident, according to local media.

Museum guards at the site in the southern city of Oswiecim immediately intervened, and police said all those involved have been detained.

They include six Poles, four Belarusians and one German, according to Glen, who told AFP that “a knife was found at the scene.”

Oswiecim police said in a statement that “one of the men used a sharp tool to kill the sheep on the premises.”

Local police spokeswoman Malgorzata Jurecka told AFP that the individuals were being questioned at a police station and police officers were investigating on site.

She said they plan to inform prosecutors of the incident, adding that the people involved “will likely be charged with desecrating a monument or other historical site”.

Oswiecim police said the individuals were also being investigated for the “unfounded killing of an animal”.

“We’re shocked and outraged by this attempt to use this memorial site for a protest and which mars the memory of thousands of victims. It’s a reprehensible act,” museum spokesman Bartosz Bartyzel told AFP.

“This is the first time something like this has happened at Auschwitz,” added museum director Piotr Cywinski.

“I have no idea what their motives were,” he told AFP.

Unconfirmed local media reports said the incident was intended as a protest against the armed conflict in Ukraine.

The Holocaust site has become a symbol of Nazi Germany’s genocide of six million European Jews, one million of whom were killed at the camp from 1940 to 1945.

Poland’s chief Rabbi Michael Schudrich said the actions of those involved were wrong, regardless of the group’s motives.

“The Germans used Auschwitz to try to eliminate the Jewish people. Any happenings are a desecration of the memory of all those killed at Auschwitz: Jews, Poles, Soviet prisoners of war, Roma and others.”

More than 100,000 non-Jews also died at the death camp, according to the museum.

An estimated 232,000 of Auschwitz’s victims were children. CBB

Read Next
Double-amputee Marine vet joins New York police department
EDITORS' PICK
DOH warns vs improper use of antigen test kits
Experience Terreno South’s refreshing take on thriving lifestyles
No to ‘negativity’: Marcos Jr. to only do ‘unbiased’ interviews
Start the year right with sustainable oral hygiene with SPLAT’s eco-friendly natural toothpastes
BBC StoryWorks and TECNO make short film about inclusive mobile camera innovations bringing people together
DOH: More beds needed than oxygen, ventilators
MOST READ
No to ‘negativity’: Marcos Jr. to only do ‘unbiased’ interviews
If she weren’t running for President, Robredo says she would vote for Pacquiao
‘Not corrupt’: Lacson says he admires Noynoy Aquino of all PH presidents
Comelec: No reason to cancel BBM’s COC
Don't miss out on the latest news and information.