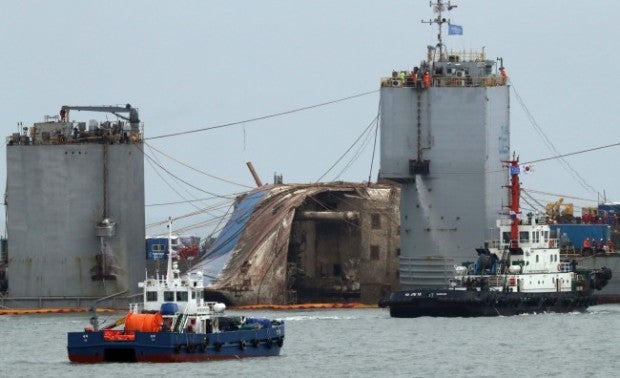 The salvaged Sewol (center) is surrounded by barges to be moved onto a semisubmersible ship to transport the ferry to a nearby port. (Yonhap)

Salvage operators raised the sunken ferry Sewol to the target height in the sea Friday, with the ferry set to be moved onto another vessel later in the day, a major step toward bringing it back to land by early April.

According to the Ministry of Oceans and Fisheries, the salvage team began to carry the 6,825-ton ship connected to two barges at 4:55 p.m. to a semisubmersible ship some 3 kilometers away.

“If we finish fixing the ferry to the semisubmersible ship, there will be no big risks (in salvaging the ferry) from then. The most important period is until midnight,” the vice minister Yoon Hak-bae told reporters during the briefing in the afternoon.

The Sewol was lifted until the highest point was 13 meters above sea-level at 11:10 a.m., making it possible for the salvage team to load it onto the semisubmersible ship before the tides get stronger Saturday.

“The raising of the semisubmersible ship 13 meters above the water and moving it onto the ship, which is the most affected by weather conditions, should be done by Friday, which is the last day of the neap tide period,” Lee Cheol-jo, the official in charge of the operation, said earlier in the day.

The authorities said the ferry was expected to arrive at Mokpo Port on April 4 if there are no adverse weather conditions and major technical problems. The biggest challenge is the weather, with the operation only possible when the waves are less than 1 meter high and wind speed is below 10 meters per second.

The salvage effort faced an unexpected hurdle on Thursday night after the team found a ramp on the left side of the ship to have come unlocked underwater. The ramp was successfully cut off and the operation resumed at around 6:45 a.m. Friday.

The ferry Sewol, which was lying more than 40 meters below the waves, emerged from the water between two jacking barges on early Thursday morning, nearly three years after it sank off the southwestern coast.

Some 450 salvage workers began the operation to raise the sunken ferry Wednesday night after the test-lifting was done successfully. The two barges were positioned on each side of the ship and beams were installed under the wreck to allow the lifting.

The victims’ grieving families have demanded the ferry be lifted intact, hoping to find the remains of the nine missing people as well as the exact causes behind the deadly accident.

“We sincerely hope to find our relatives as soon as possible, but a safe recovery is more important than a quick recovery,” said the bereaved families looking for their family members’ missing bodies on a boat some 1.6 kilometers away from the salvage operation.

The families of the missing have been watching the operation from the boat while other bereaved families have overseen the process from a hilltop on Donggeochado, the nearest island to the operation.

As the ferry Sewol began to move to the semisubmersible ship in the afternoon, families of the missing hugged each other and burst into tears.

“It is a relief to see the ferry with my eyes. The salvage of the ferry was what all the mothers and fathers have wanted,” Lee Keum-hui, mother of a missing student Jo Eun-hwa. “I hope this country becomes more responsible in protecting its people from now on.”

The Oceans Ministry said it plans to religious memorial ceremony for the missing victims and their grieving families once the ferry is bound to the semisubmersible ship.

The safe recovery of the ferry is crucial in finding the missing bodies and the causes of the accident, experts say.

Despite a probe into the maritime accident by an independent body, little has been found so far, with the causes generally thought to be a combination of illegal redesign of the ship, cargo overloading and inexperience of the crew.

The manmade disaster triggered soul-searching across the nation as it revealed many of the problems facing the Korean society — the government’s lax safety regulations, its incompetence in saving people’s lives and businesses’ obsession with maximizing profits.