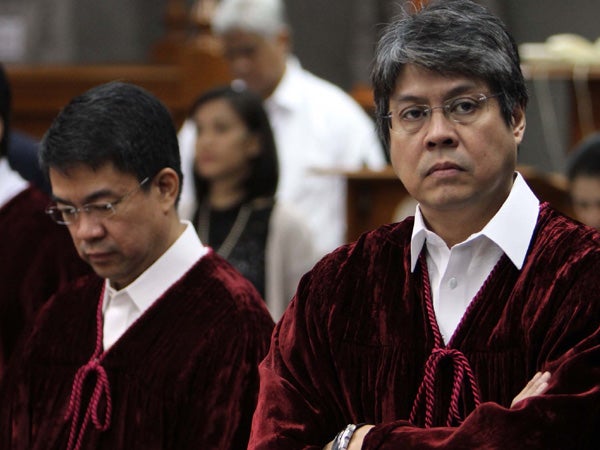 To compare the President’s ideologies with the late strongman Ferdinand Marcos’ was an insult to the ruling party, PDP-Laban, its president and Senate President Aquilino “Koko” Pimentel III said on Friday.

“Sa mata ng Presidente observance or following the law has become optional. Tama ‘yun, masyado na tayong optional lang. Dapat may kamay na bakal in enforcing the law. But part of the law is the Constitution, so due process, respect for human life. That’s why we’re reminding our police officials palagi na all-out war against drugs kasi may anti-drug law e. Implement the law but of course may bill of rights so respeto din.”

(In the eyes of the President, observing or following the law has become optional. He is right, we have become optional. There should be a great resolve in enforcing the law. But part of the law is the Constitution, so due process, respect for human life. That’s why we’re reminding our police officials to go all-our in the war against drugs because there is anti-drug law. They should implement the law, but of course with respect because there is also the bill of rights.)

The Senate leader also debunked Pangilinan’s earlier statement that the ouster of anti-death penalty lawmakers from their key posts in the House of Representatives was a “disturbing indicator of a dangerous slide toward authoritarianism.”

READ: Pangilinan on oust-Duterte plot: We’re in democracy, not dictatorship

He pointed out that while the President had strong opinions on certain issues, he had never intervened in the affairs of Congress.

(Does he call me or us? No. Does he dictate on us? No. So he has not done the first few steps toward an authoritarian regime, so how can he say that were are headed there?)

Pimentel, meanwhile, mocked Senator Antonio Trillanes IV’s claim that Duterte could be ousted from his post should the impeachment complaint filed against him reach the Senate.