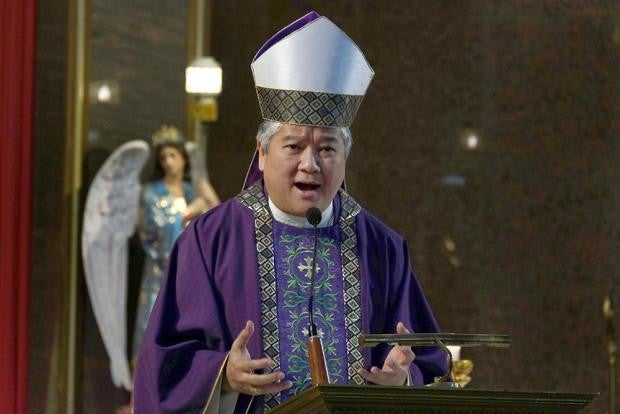 Lingayen-Dagupan Archbishop Socrates B. Villegas at the Cathedral of Saint John the Evangelist, Dagupan City on Thursday, March 23, 2017. (Photo from CBCP News)

Lingayen-Dagupan Archbishop Socrates Villegas presented on Thursday the “stories of conversion” of self-confessed hitmen Edgar Matobato and Artuor Lascañas, who, he believes, have been touched by the mercy of God.

“Edgar and Art are true stories of conversion. They want to pay for the murders they got paid for,” Villegas, also the president of the Catholic Bishops Conference of the Philippines (CBCP), said in his Lenten message titled “Edgar and Art and God’s Mercy.”

Villegas delivwered his message at the the Cathedral of Saint John the Evangelist in Dagupan City.

“It is not necessary,” he added. “Jesus had paid the price on Good Friday. On the charge sheet for the sins of Edgar and Art, Jesus had stamped in clear words ‘PAID’.”

Villegas did not mention their surnames in his Lenten message, but he confirmed in a text message to Inquirer that he was indeed referring to Matobato and Lascanas.

Lascañas and Matobato claimed to be part of the so-called Davao Death Squad, which they said moved on orders of President Rodrigo Duterte to kill criminals and enemies when he was still mayor of Davao City.

“I believe in conversion,” Villegas said in his message. “Touched by grace, we cannot remain the same. Everything King Midas touched became gold. Everybody touched by God is changed. The start of change is repentance. When repentance is sustained, it leads to new life.”

“There will be more joy in heaven over one sinner who repents than over 99 righteous people who have no need of repentance,” he added.

I believe in conversion. Touched by grace, we cannot remain the same. Everything King Midas touched became gold. Everybody touched by God is changed. The start of change is repentance. When repentance is sustained, it leads to new life.

Edgar was almost illiterate. He only knew how to scribble his name kahig ng manok at its best. He could not read English. He could not write a straight sentence. Sadly, he did not know God too. He had heard of God and the Ten Commandments but nothing more. He had no guilt at his first murder. He was just afraid to be caught. He was so sure he would not get killed because somebody had assured him repeatedly “Sagot kita!” His fear of getting caught became less and less because a voice was always there to assure him “You will not be caught.” Killing was not a sin. It was not a crime. It was livelihood. He fed his family from killing people. He killed to earn a living.

Art was educated. He could speak English. He could write. He was policeman. He was alagad ng batas (officer of the law). He was paid to enforce the law. People feared him. He intimidated his neighbors. He had a gun. He had killed criminals. He believed he was serving humanity by “removing” bad people from society. He was a fanatic follower of the vision of a peaceful and orderly society no matter what the price. He had a vision not his own. Superman gave him his life mission – it was to rid society of the drug menace. He allowed the murder of his two brothers. He had killed in the hundreds. The mission is clear – a peaceful community without criminals. But why was he killing innocent people too? His numbed soul was disturbed.

Edgar’s slow path to conversion began when he sensed he was no longer safe. His life was at risk. He was now dispensable. He felt his former bosses wanted to get rid of him. He was to become a scapegoat. He was beaten up. He escaped and fled for his life. At that moment, the God of mercies rescued him and Edgar believed. Edgar held on to God for love of his life. He asked God for security. He asked God for safety. Did God confront him or rebuke him for the murders he was paid for? Not at all! God just embraced him like the returning younger son in the parable of the prodigal son. Edgar did not even say “Lord have mercy”. He just said “Lord save me they will kill me.”

Art had a visit from the devil. He saw his life in a flash. He saw the whole mural of his life painted with the innocent blood of his victims. He could have died from the kidney ailment. God saved him from death although he had brought hundreds to their brutal death. Like a good Catholic in his childhood years, he asked for mercy confessing his sins. He knew his soul was clean and he was ready to die or get killed. He didn’t care. He was touched by mercy. He was not Superman but he received Super Love. He sobbed. He rose up ready to soar the skies.

Edgar asked for a safe house. In the safe house, he did not only get safety. He met the Divine Mercy. He knew he was loved but he was not sure if his sins could still be forgiven. He was assured by the priest of God “Neither do I condemn you. Go now and leave your life of sin.” Edgar had found himself, his real self. Edgar rose to repair his harm. He could not bring the dead back to life but he wanted to stop more murders. He told the truth. The educated sneered at him. He admitted his crime. The authorities mocked him.

But the accused was quiet and dumbfounded, speechless for days.

Art was struggling to change his life but he was taken over by fear. Like Peter, he denied. He lied. And he wept quietly in the dark. He was back to darkness again. The man who was brave enough to kill hundreds did not have the courage to tell the truth. How ironic! He did not give up. He returned to his knees and sobbed tears of shame and guilt. He heard a voice again “Do you love me? Feed my people. Feed them the food of truth. Set my people free. I will wait”, the Lord assured Art.

Edgar and Art are true stories of conversion. They want to pay for the murders they got paid for.

It is not necessary. Jesus had paid the price on Good Friday. On the charge sheet for the sins of Edgar and Art, Jesus had stamped in clear words “PAID”.

There will be more joy in heaven over one sinner who repents than over ninety-nine righteous people who have no need of repentance.