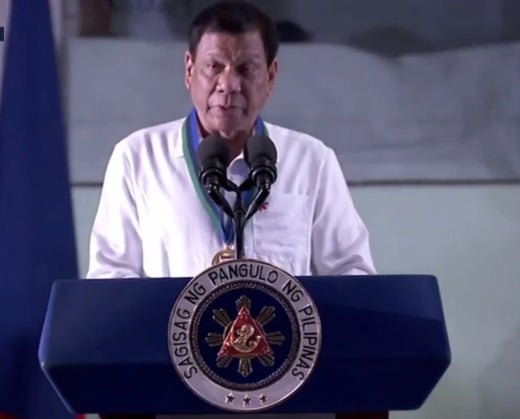 President Rodrigo Duterte on Thursday led the change of command of the Presidential Security Group.

Duterte, who had just gotten back from his trip to Thailand, was at the PSG Grandstand on Thursday afternoon to witness the turnover of command from BGen. Rolando Joselito D. Bautista to Col. Lope C. Dagoy.

Duterte was still in Bangkok when Dagoy was announced as the new PSG head.

Dagoy is the President’s senior military adviser and a member of the Philippine Military “Hinirang” Class of 1987.

Meanwhile, Bautista has been assigned to head the army’s 1st Infantry Division in Pagadian City, Zamboanga del Sur. He was a former commander of the 104th Brigade in Basilan and the 73rd Infantry Battalion in Davao.

Dagoy used to be the chief of staff of Eastern Mindanao Command (Eastmincom) head Lt. Gen. Rey Leonardo Guerrero. Eastmincom is based in Davao City where Duterte served as mayor for more than two decades. IDL

Read Next
‘Save Duterte from hell and save Satan from his potty mouth’
EDITORS' PICK
Look Through: The fate of impounded stray dogs
House energy committee chair Arroyo bats for cheap electricity
What to watch out for when selecting a video surveillance solution
23,000 cops to be deployed nationwide for school reopening
Unleash the photographer in you this World Photography Day with vivo smartphones
DOH says COVID-19 cases plateauing, but public shouldn’t be ‘complacent’
MOST READ
Korina Sanchez reunites with former ABS-CBN co-anchors Julius Babao, Cheryl Cosim
Sharon Cuneta asks for prayers for friend in ICU who suffered silent stroke
QC school’s shutdown violated rules – CHEd
Light therapy could be the answer to your sleep problems
Don't miss out on the latest news and information.