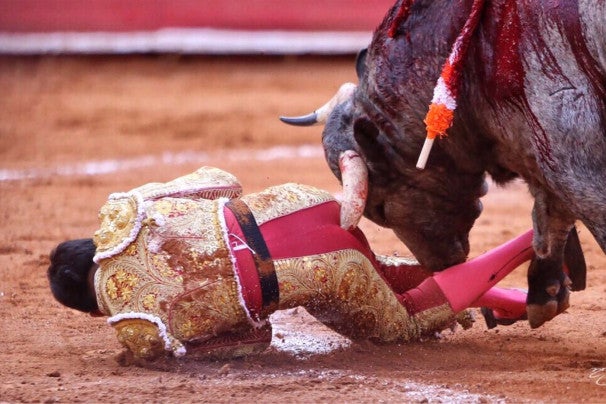 A shocking accident occurred during a bull fight in Mexico City, when a matador ended up being gored by a raging bull’s 11-inch horn.

Antonio Romero was immediately rushed to the hospital as the bull’s horn penetrated his rectum and caused “severe” injuries, reports New York Post.

A video clip of Romero during the incident has been circulating the internet, and readers be warned, the clip is quite graphic.

It shows Romero seemingly in control of the situation when the bull suddenly knocked him off balance. The raging animal then came at the defenseless matador with its horns. In a split second, one of its horns deeply penetrated Romero’s rectum.

Luckily, the intervening matadors managed to get the bull’s attention and gave authorities the opportunity to get Romero out of the ring. Alfred Bayle/JB

Read Next
Duterte eyes declaring all barangay posts vacant in October
EDITORS' PICK
Omicron: What science knows so far about latest Greek-lettered COVID variant
Legarda: Ending Violence Against Women, a cause for all
This new condo in the South will make you want to turn a new leaf
Smart offers wireless fiber-like speeds to Filipino homes with country’s first 5G Prepaid Home WiFi
DOH: Booster doses for fully vaxxed adults to start December 3
NGCP transmission tower in Lanao del Sur bombed
MOST READ
‘Maski na hindi ‘yung mga bright’: Duterte urges public to elect new leaders
Pacquiao to voters: If you can’t vote for me, then don’t vote for a corrupt candidate
Roque defends Bongbong Marcos: ‘He was only 15 years old in 1972’
Another disqualification petition filed against Bongbong Marcos
Don't miss out on the latest news and information.