US, Britain ban laptops on flights from Turkey and Arab world 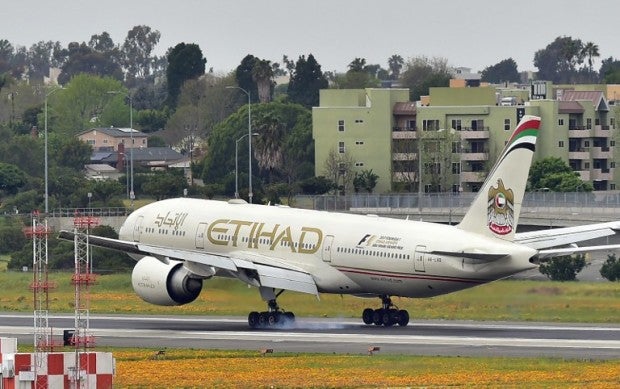 An Etihad Airways aircraft, flight 171 from Abu Dhabi, comes in for a landing at Los Angeles International Airport on March 21, 2017, in Los Angeles, California. From toothpaste to pocket knives, ink cartridges and scissors, the US cabin ban on electronic devices on flights from the Middle East and North Africa adds to a long list of products already blacklisted on international flights. AFP

WASHINGTON, United States — The United States and Britain on Tuesday banned larger electronic devices from the passenger cabin on flights from some airports in Turkey, the Middle East and North Africa.

The US has given nine airlines from eight countries until the weekend to tell travelers to America to pack laptops, tablets and portable game consoles in their hold luggage.

No US carriers are affected, but the ban hits passengers on approximately 50 flights per day from the busiest hubs in the Arab world and the three Gulf carriers that recently emerged as giants; Emirates, Etihad and Qatar Airways.

Britain issued a similar order, applied to direct flights from a shorter list of countries. Other countries are expected to follow suit. Canadian and French officials are considering a ban, but Germany said it was not.

“The restrictions are in place due to evaluated intelligence and we think it’s the right thing to do and the right places to do it to secure the safety of the traveling public,” a senior US official said.

US officials would not say how long the ban would last, but the Dubai-based Emirates airline told AFP that it had been instructed to enforce it until at least October 14.

The US officials, speaking on condition of anonymity, refused to discuss the “intelligence information” that led the Transportation Security Administration (TSA) to issue the order.

But one said concerns had been “heightened by several successful events and attacks on passenger lanes and airports over the last years.”

Reaction from the affected airports’ host governments was generally low-key, and Emirates turned the situation into a light-hearted ad extolling the strengths of its inflight entertainment, entitled: “Who needs a laptop?”

But one government, Turkey, denounced the order and demanded that it be rescinded or scaled back.

“We particularly emphasize how this will not benefit the passenger and that reverse steps or a softening should be adopted,” Transport Minister Ahmet Arslan told reporters.

“We already take all kinds of security measures,” he said.

The US official would not go into detail about which attacks had raised fears, but one cited an incident from February of last year in which suspected Somali Islamists blew a hole in the side of a Daallo Airlines passenger jet with a small device. Only the bomber was killed and the plane landed safely.

“Evaluated intelligence indicates that terrorist groups continue to target commercial aviation and are aggressively pursuing innovative methods to undertake their attacks, to include smuggling explosive devices in various consumer items,” an official said.

CNN quoted a US official as saying the ban was believed to be related to a threat posed by Al-Qaeda in the Arabian Peninsula, or AQAP.

The British ban only involves six countries, two of which — Lebanon and Tunisia — do not feature on the US list. The change affects six British airlines, including British Airways and EasyJet, and eight foreign carriers.

US lawmakers said they had been briefed over the weekend on the classified intelligence behind the ban, and the senior Democrat on the House Intelligence Committee said he backed it.

“These steps are both necessary and proportional to the threat,” Adam Schiff said.

“We know that terrorist organizations want to bring down aircraft and have continued to employ creative ways to try and outsmart detection methods.”

Tom Blank, a former head of security at TSA, told AFP: “This bears the mark of a response to some specific set of the intelligence data that has come to the attention of US authorities.”

Airlines will be responsible for policing the cabin ban, and if they fail to do so, they could lose their rights to operate US routes.  CBB