Reality catching up with Trump amid drop in job approval rating 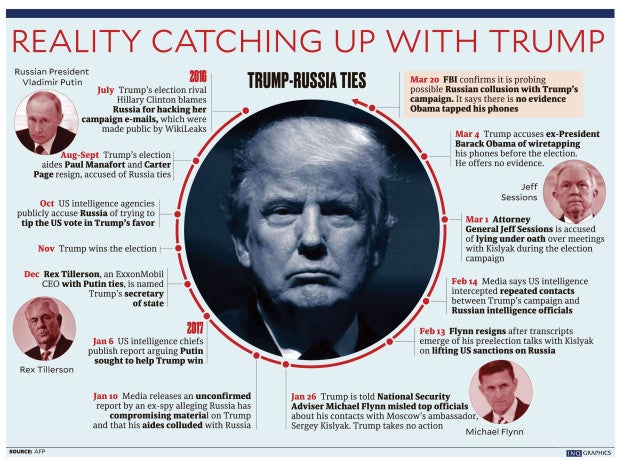 WASHINGTON—With his job approval rating plunging to just 37 percent, according to the latest Gallup poll, US President Donald Trump is finding his political position becoming shakier.

His sinking rating is not helped by his reactions to a congressional probe of his campaign’s links with Russia.

Hours after Trump dismissed reports that his campaign associates were being scrutinized for colluding with Russia as “fake news,” FBI Director James Comey confirmed the investigation was real.

No evidence of bugging

The FBI chief also repeatedly insisted there was no evidence to back up Trump’s explosive claim that his predecessor wiretapped his New York skyscraper.

And Adm. Michael Rogers, head of the National Security Agency, knocked down a report about Britain helping then President Barack Obama with the alleged surveillance, although the White House had pointed to the report to try to boost Trump’s case.

Taken together, the disclosures in Monday’s lengthy House intelligence committee hearing amounted to an extraordinary undercutting of a president, whose headline-grabbing accusations and Twitter-friendly attacks crumbled quickly under the weight of sworn congressional testimony from some of the nation’s top security officials.

Many of Trump’s most ardent supporters are unlikely to be swayed by Monday’s spectacle.

Still, Trump’s credibility and his standing as a reliable ally for his fellow Republicans in Congress are less assured.

Even if his advisers are ultimately cleared in the Russia probe, as the White House insists they will be, the investigation could loom over Trump’s presidency for months or even years, distracting from the ambitious domestic agenda he has vowed to enact.

That reality was abundantly clear on Monday.

Most cable news channels carried Comey and Rogers’ five hours of testimony live instead of the first congressional hearing for Neil Gorsuch, Trump’s widely praised nominee for the Supreme Court.

The Russia hearings came as Trump tried to give a hard sell to Republicans wary of his healthcare package, a legislative gamble with long-lasting implications for Trump’s relationship with his own party.

The president’s political position was already shaky heading into Monday’s hearing, the first of several public sessions the House and Senate intelligence committees are expected to hold.

His job approval rating has tumbled to a record low 37 percent, according to a new Gallup poll, down 6 points from a week earlier.

Trump has long been shadowed by questions about his ties to Russia, given his friendly posture toward Moscow and his advisers’ curious web of ties to Russia.

The White House insists the Trump campaign did not coordinate with Russia on the hacking of Democratic groups during the election and dismisses the swirling controversy as little more than a political witch-hunt.

Yet Monday’s hearings left the White House scrambling for cover, though there was little to be found.

Spicer touted statements from lawmakers and former Obama administration officials saying they had seen no evidence of collusion between Trump associates and Russia.

But he dismissed nearly identical statements from some of those same officials about Trump’s wiretapping allegations, saying it was too early in the investigations to draw any conclusions.

In one particularly eyebrow-raising moment, Spicer resorted to claiming one associate, Paul Manafort, had a “very limited role” in the 2016 election.

In fact, Manafort was hired in March last year as Trump’s convention manager and promoted to campaign chair the following May.

Flynn traveled frequently with Trump, delivered a high-profile speech at the Republican National Convention and served as his first national security adviser.

Both Manafort and Flynn were fired by Trump after revelations about their connections to Russia.

Flynn was fired in February for misleading top officials about his contacts with Russia’s ambassador to the United States.

Both Manafort and Flynn are among the Trump associates under scrutiny for possible contacts with Russia during the election.

The Senate intelligence committee has also asked Roger Stone, a longtime Trump adviser, and Carter Page, an investment banker who briefly advised the campaign on foreign policy, to retain documents related to its inquiry.

The White House, with the backing of some Republican lawmakers, says the real controversy is how the investigation of Trump’s advisers became public.

They argue the focus of the probe should be ferreting out who leaked classified information.

Trump tried to go on offense in the middle of the hearing, launching a series of tweets from his official White House account, including one that appeared to blame the Obama administration for leaking details of Flynn’s contacts with the Russian envoy.

Another tweet incorrectly said Comey and Rogers had told lawmakers that Russia “did not influence” the electoral process.

In a moment of real-time fact-checking, the FBI director made clear that was not a declaration he had made.

“We don’t have any information on that subject,” he said. —AP

Read Next
DOH bucks 2-tier tax system on cigarettes
EDITORS' PICK
Palace: Duterte unfazed by ICC probe on drug war killings
Palace says ICC prosecutor report is ‘fantastical,’ based on ‘hearsay’
Smart brings KCON:TACT especially 4U to subscribers from June 19 to 27
Defending himself before ICC ‘logical thing to do’ for Duterte, says Drilon
Synology NAS: A photo storage and multimedia server for your home
Kai Sotto, Angelo Kouame lead Gilas final 12 vs South Korea
MOST READ
Palace says ICC prosecutor report is ‘fantastical,’ based on ‘hearsay’
Murder suspect tries to sell car with dead GF in backseat
Duterte to meet with Sotto, Velasco to discuss fate of BARMM polls
Opposition ‘must go beyond anti-Duterte platform’ in 2022 polls – Drilon
Don't miss out on the latest news and information.