Bato: I did not read Leni’s ‘palit-ulo’ letter 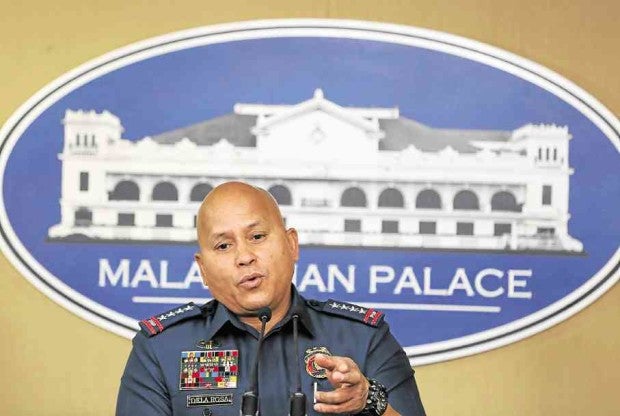 Philippine National Police chief Director General Ronald “Bato” dela Rosa on Tuesday said Vice President Leni Robredo did not inquire about the alleged “palit-ulo” (head swapping) scheme from the police organization when she wrote to ask about the statistics on the war against drugs.

Dela Rosa said he did not read Robredo’s letter because it was addressed to Interior Secretary Ismael Sueno.

“She did not ask for clarification or explanation about the palit-ulo scheme. She only asked for lists (about the statistics on the war against drugs) so that she could address the concerns of members of the public,” Dela Rosa said.

PNP spokesperson Senior Supt. Dionardo Carlos had said that the Vice President’s camp should have consulted the PNP first before airing the issue of the palit-ulo in an international conference.

In a video presented at a United Nations conference in Austria, Robredo said erring policemen were arresting relatives of drug suspects in poor communities who do not surrender under the PNP’s Oplan Tokhang campaign.

For his part, Sueno called on Vice President Leni Robredo to support with evidence her allegation that there was a palit ulo scheme in the PNP’s war on illegal drugs.

“What palit ulo? There is no such thing as palit ulo in the antidrugs operations of the PNP. I respectfully request the Vice President to please corroborate her statement,” Sueno said in a statement.

“It would help if Vice President Robredo presents to us solid proof about this so-called palit-ulo scheme so we can act on it immediately,” Sueno said.

He said the leadership of the PNP and the Department of the Interior and Local Government was open to suggestions from stakeholders on how to effectively win the war against drugs even as it has revised its antidrug strategy with the launching of Oplan Double Barrel, Reloaded.

Sueno said the letter sent by Robredo seeking information on the drug war was forwarded to Interior Undersecretary Catalino Cuy, who forwarded the request to the PNP.

“The PNP is not hiding anything and, in fact, we have always been transparent about Oplan Tokhang and we have been providing the public regular updates about Tokhang operations through the media,” he said.

Sueno said his office had “always been cordial” to the Vice President and he himself had even paid a courtesy call on Robredo last year to discuss how they can work together to solve jail congestion problems.

The Vice President’s camp said Robredo wrote Dela Rosa and Sueno before the video was presented but received no reply.

Dela Rosa said he did not receive the letter because it was addressed to Sueno and was thus forwarded to the latter’s office.

“I did not read any letter from her because it was addressed to Secretary Sueno. It did not land on my table because the message center forwarded it immediately to the office of Secretary Sueno,” he said.

Dela Rosa said the police officer who handled the letter did not see that he should have been furnished a copy.

He said the letter was also referred to the PNP Directorate for Investigation and Detective Management so that it could supply Sueno’s office with the data Robredo was asking.

Dela Rosa said Robredo was asking for the list of deaths in the drug war, deaths that were still under investigation and other issues about the drug war “but nothing about palit-ulo.”

“She was asking for these lists so that she could answer the concerns raised by members of the public. We will give them to her. She’s the Vice President of the Philippines. Why would we hide the data?” he said.

“I just don’t know if the data is for the members of the public or if it is for the UN,” Dela Rosa said.