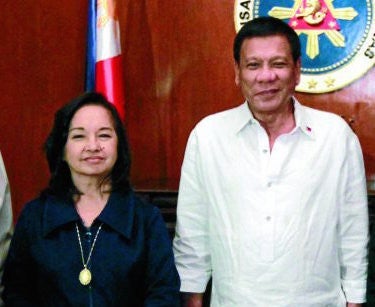 NAYPYITAW, Burma (Myanmar)—Former President and now Pampanga Rep. Gloria Macapagal-Arroyo may have been unseated as deputy Speaker at the House of Representatives, but President Duterte does not discount the possibility of giving her a place in his administration.

When asked by the media on Sunday if he was considering to appoint Arroyo to lead the planned executive-ordered commission to help Congress revise the Constitution for a shift to a federal system of government, Duterte replied, after a pause, “Maybe.”

“She might now want that—but maybe,” Duterte said in Filipino.

Arroyo failed in her effort to amend the Constitution during her term as President. She had formed a Consultative Commission which recommended a unicameral parliamentary form of government, decentralization of the national government and more powers to local government units. Congress then had also tried, but failed, to convene a constituent assembly.

When asked if he was eyeing Arroyo as Cabinet member, Duterte was quicker to say no.

“I don’t think she will accept it. She cannot be working under a president when she was already a president. That will be quite a tall order for her to do. But representing the people of the district of her own province would be somehow acceptable to even everybody,” the President said.

In a speech during his meeting with the Filipino community here, Duterte said that if Mindanao is not given “the structure of federalism they are asking for, we will never find peace.”