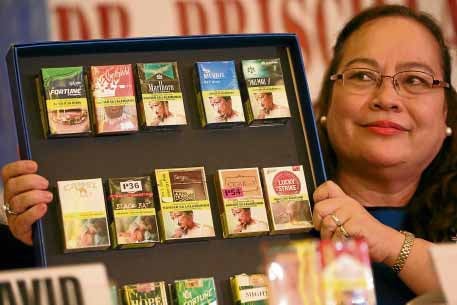 More than 1 million Filipinos have kicked the smoking habit, according to the latest Philippines’ Global Adult Tobacco Survey (GATS), the global standard protocol in monitoring adult tobacco use.

In a press briefing on Monday, Health Secretary Paulyn Ubial said a number of tobacco control interventions, particularly taxation, has led to a significant drop in current smokers from 17 million in 2009 to 15.9 million in 2015.

“This figure represents a relative reduction of close to 20 percent of smokers. Or in simpler terms, 1 million Filipinos have quit tobacco use—the biggest decline we have seen in Philippine history, and we can do more to stop the suffering caused by this epidemic,” Ubial said.

She said other measures that had contributed to the decline in smoking were graphic health warnings, local ordinances and advocacy of the health sector in strong partnership with civil society.

“The decrease in the number of smokers as well as exposures to secondhand smoke was due to increase in the prices of tobacco products brought about by the Sin Tax Reform Law of 2012, among other things. Cigarette products have become more inaccessible to the public, especially to the poor and the youth,” Ubial said.

“We look forward to more positive outcomes from Republic Act 10351 in the long run,” she said.

She noted that the reduction in tobacco use translated to a million Filipinos at lower risk for cancer, heart disease, asthma and chronic obstructive pulmonary disease.

Citing the results of the survey, Ubial said that currently, only 15.9 Filipino adults smoked tobacco—40.3 percent among men, 5.1 percent among women.

Read Next
Duterte slams critics of his war on drugs
EDITORS' PICK
Metro Manila to remain under COVID Alert Level 2 until December 15
IATF tightens border control, suspends entry of fully vaxxed nationals from ‘green’ countries
Legarda: Ending Violence Against Women, a cause for all
Duterte open to making jabs mandatory; Cabinet mulls ‘pressuring’ the unvaccinated
Villar Group gears up for AllValue Shopping Party on Dec. 3; around P 1-million promos and discounts up for grabs
A delightful blessing!
MOST READ
Quiboloy warns of ‘much worse than Omicron virus’ if his ‘persecution’ is not stopped
Bongbong Marcos’ conviction in tax case not a crime involving moral turpitude — lawyer
IATF tightens border control, suspends entry of fully vaxxed travelers from ‘green’ countries
Marcoleta defends pol ads on ABS-CBN
Don't miss out on the latest news and information.