Ex-solon to go to trial for pork case 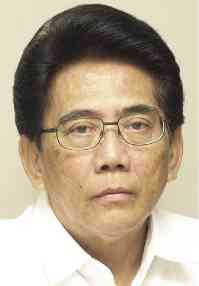 A criminal case against ex-legislator Salacnib Baterina for misuse of public funds through the pork barrel scam allegedly masterminded by Janet Lim-Napoles has been elevated to the antigraft court Sandiganbayan for trial.

Seven criminal cases were filed by the Office of the Ombudsman at the antigraft court on Friday over the alleged misuse of Baterina’s Priority Development Assistance Fund (PDAF) allocations on “ghost” livelihood projects given to nonexistent groups allegedly created by Napoles.

The Ombudsman did not include then-budget secretary Rolando Andaya Jr. in the charges despite him originally being indicted for issuing budget release orders in spite of the absence of project profiles and endorsements  from implementing agencies.

Andaya, who is now a Camarines Sur representative, was excluded after the Ombudsman gave weight to his argument that the profiles and endorsements were not necessary since they were included in the appropriation law’s PDAF menu.

Baterina, former Ilocos Sur congressman, was charged with three counts each of malversation and violation of the Anti-Graft and Corrupt Practices Act, and one count of direct bribery.

The cases for graft, malversation and direct bribery arose from Baterina’s endorsement of Philippine Social Development Foundation Inc. (PSDFI), a Napoles group, for a livelihood project worth P9.6 million.

Prosecutors claimed that Baterina and former ERC chair Ducut “received commissions and kickbacks” from Napoles in exchange for endorsing Napoles’ group for the project.

The alleged bribe amounted to P3 million, nearly a third of the value of the projects involving PSDFI.

Two other sets of graft and malversation cases were filed for the release of P24.3 million on two occasions to Kaagapay Magpakailanman Foundation Inc. (KMFI), another Napoles group.

KMFI was allegedly handpicked by Baterina under similarly anomalous circumstances.

Read Next
PNP chief says no warrant needed to get David Lim Jr.
EDITORS' PICK
Kalinga, Ifugao, Mt. Province, N. Samar will be under Alert Level 4 from Jan 21-31
Gear up and get ready to play with Yamaha Mio Gear
Mobile COVID-19 vaccination for commuters, transport workers set at PITX
Acer starts the year off strong with the Aspire Vero National Geographic Edition
Municipal court in Pangasinan sets arraignment for ‘Lolo Narding’
31,173 new COVID-19 cases push PH’s active tally to 275,364
MOST READ
Imelda Marcos trends on Twitter after octogenarian jailed for allegedly stealing mangoes
SSS: Members on home quarantine due to COVID-19 can apply for sickness benefit
Villar backs implementation of EDSA decongestion blueprint
Help pours in for octogenarian jailed for ‘stealing’ mangoes in Pangasinan
Don't miss out on the latest news and information.