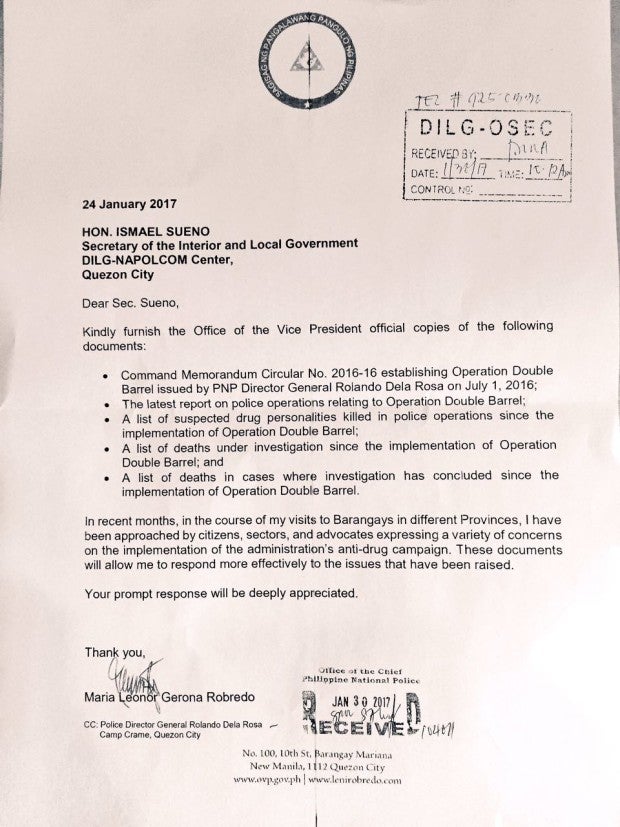 The camp of Vice President Leni Robredo on Monday showed a copy of a letter she sent to the Department of Interior and Local Government (DILG) and the Philippine National Police (PNP), which expressed her concerns about President Rodrigo Duterte’s drug war.

In a hastily called press conference in Quezon City, Barry Gutierrez, Robredo’s legal consultant, showed the letter, disputing PNP chief Ronald dela Rosa’s claim that the Office of the Vice President did not communicate with his office before releasing a video message that raised the issue of extrajudicial killings in the Philippines.

The letter, addressed to Interior Secretary Ismael “Mike” Sueno, was sent on January 24. It was received by Sueno’s office and the office of PNP chief Ronald “Bato” dela Rosa on January 30.

During a press conference on Monday, Dela Rosa claimed that Robredo failed to relay her concerns about the drug war to the PNP before sending the controversial video message. The video message was addressed to foreign delegates attending a United Nations-sponsored conference in Austria last week.

“Paano ko mapapansin ‘yung sulat na hindi naman nakarating sa akin? Ha? (How could I read the letter when it did not even reach me?)” Dela Rosa said.

Dela Rosa was referring to the “Palit-ulo” (head swapping) scheme that Robredo bared in the video. Robredo said government forces have been employing the scheme in poor communities. The scheme involves the police taking hostage the wife, husband, or relative of a drug suspect who had not surrendered under the PNP’s “Oplan Tokhang” campaign.

The PNP earlier expressed dismay over Robredo’s video message, saying she should have raised her concerns with the PNP and other government agencies before addressing the international community.

But in the letter, Robredo, as early as January, asked Sueno and Dela Rosa’s office to give her office the latest report on the PNP’s “Oplan Double Barrel,” a list of those killed in police operations, a list of deaths under investigation (DUIs) since July and a list of cases of DUIs that have been solved.

Robredo said that in her visits to different provinces, she has been approached by citizens who expressed concerns about the administration’s campaign against illegal drugs.

She said the documents will allow her to “respond more effectively to the issues that have been raised.”

Gutierrez expressed concern about the PNP and DILG’s inaction on the Vice President’s request.

“Papaano pa natin aasahan na sagutin nila ang mga ordinaryong Pilipino na lalapit sa kanila at magreklamo? (How can we rely on them to answer ordinary Filipinos who want to complain?)” he said.

“It’s incumbent on them to explain how come they received a letter and yet more than a month there’s no response, in addition to that, they’re even denying that they received the letter,” Gutierrez added. KS/rga