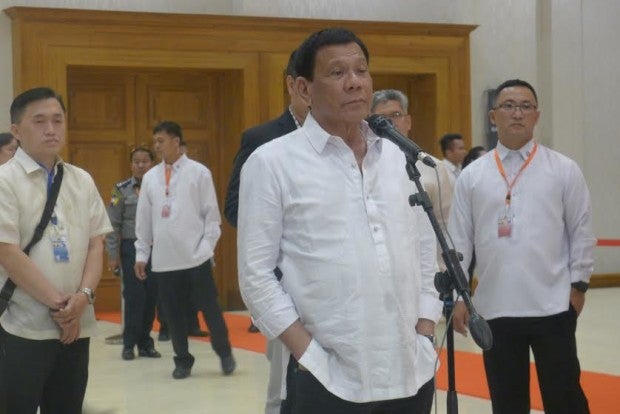 NAY PYI TAW, Burma — While the President’s men and allies may keep harping about supposed “destabilization plots” against  him, the President himself has dismissed them as nothing but “all politics, actually.”

In an interview with the media after his meeting with the Filipino community here late Sunday night, Duterte was dismissive when asked if he would hale to court those who were supposedly “destabilizing” his administration: “It’s all politics actually. In the matter of going after them, it has not reached that level of violence–destabilization. It’s more of publicity.”

Duterte observed the loose talk on destabilization: “The talk about destabilization I think is a bit too… well, it is just an exponential word, actually. It has no limit.”

The President clarified that for “destabilization” to occur, “you have to have the kind of situation where there is already violence committed and imposed on the population whether they are with you or against you.”

Duterte cited as an example the violence in some parts of Mindanao: “Pagka ginulo nila ang bayan (When they sow chaos in the country), just like what is happening in Mindanao… If it goes out of hand and children are already targeted for killings, ibang istorya na iyan (that’s another story).”

“Destabilization” has become a go-to allegation thrown around by the President Duterte’s men and allies, in the face of criticisms against the bloody “war on drugs,” and recently, an impeachment complaint against the President.

But for Duterte himself: “For as long as it is really a peaceful exercise of the freedom of speech and freedom of the press, there’s nothing I can do about it. It’s guaranteed under the Constitution.”

“As far as just being criticized, I would allow them. I cannot do anything because the Constitution guarantees criticism. And to peaceably assemble and maybe to address whatever grievance,” Duterte said.

Duterte went on to say that while he never denied that “a lot of people have been killed” in his war against drugs, he never gave orders to slaughter families or innocents.

“For the life of me, I cannot imagine giving an order killing people who are innocent, or even a criminal on bended knees or with outstretched hands in surrender,” the President said.

Duterte explained that when he mentioned killings, it was just an expression of his rage against the narcotics scourge.

“I never ordered anybody in private or in public…Ang sinabi ko: ‘Papatayin kita. Ako iyon.’ (‘I’ll kill you. That’s just me.’) And that is just a rage in my heart,” the President said.

In his speeches, Duterte explained, he made such threats to kill as a  hyperbolic device “para makita nila kung gaano ako kagalit sa droga (so they can see how angry I am about drugs) and for what it has done to my country.”  SFM/rga