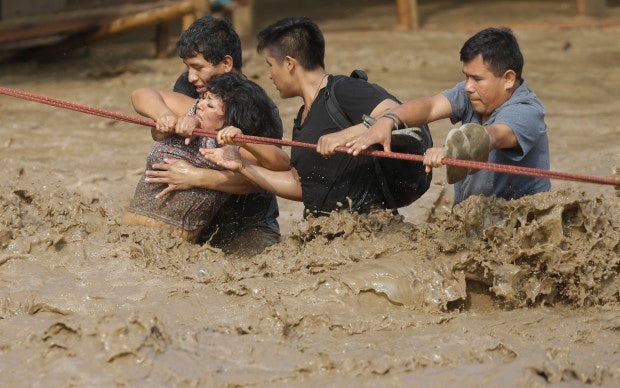 A group of people, stranded in flood waters, hold onto a rope as they wade through flood waters to safety in Lima, Peru, Friday, March 17, 2017. Intense rains and mudslides over the past three days have wrought havoc around the Andean nation and caught residents in Lima, a desert city of 10 million where it almost never rains, by surprise. (AP Photo/Martin Mejia)

Torrential rains triggered flash floods in the Peruvian capital Lima, stranding thousands of people Friday and forcing rescuers to find ways to evacuate them across roads turned to raging rivers.

The inundation came as the National Emergency Operations Center said at least 65 people have been killed in Peru this year in natural disasters, the latest being three deaths in a flood in the La Libertad region of northern Peru. Two people were missing.

After weeks of heavy rain, some residents on the outskirts of the capital of 10 million people awoke Friday to the realization their bedrooms were filling with water.

Others found themselves cut off by mudslides that blocked portions of the main highway linking Lima to the center of the country.

In one dramatic scene, rescuers used zip lines to help residents of Lima’s Huachipa neighborhood escape over the torrent of brown water that was once their street, as it swallowed up cars and trucks.

The floods have been triggered by El Nino, a warming of surface temperatures in the Pacific Ocean that wreaks havoc on weather patterns every few years.

This year it has hit Peru particularly hard.

“It’s a difficult situation, there’s no doubt about it. But we have the resources” to deal with it, said President Pedro Pablo Kuczynski.

The government announced it would release 2.5 billion soles ($760 million) in emergency funds to rebuild affected areas.