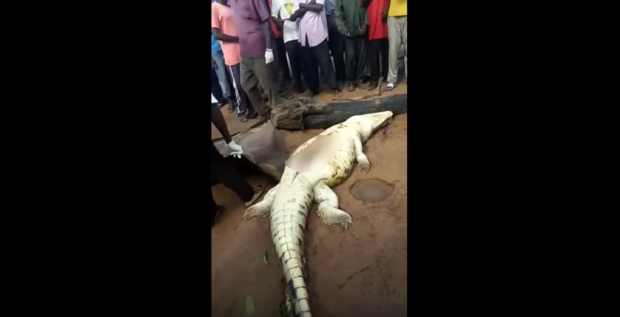 A crocodile was recently killed after it had devoured an 8-year-old schoolboy in Mashonaland, Zimbabwe, local news reports said.

According to local news sites Bulawayo24 and News 24, the beast was captured and killed to retrieve the remains of the victim, who was then crossing the Hunyani River from school on Monday when the incident took place.

On Tuesday, villagers suspected the reptile of ravaging the victim and decided to kill it. Upon ripping its belly, they were frightened to find the boy’s body parts inside. The parts were removed and buried two days later.

Based on footage captured by the local news site and uploaded on YouTube, terrified residents watched the grisly operation as rescuers carefully placed the boy’s remains on a gray blanket next to the crocodile.

Local reporter Simbarashe Sithole said, “The crocodile was shot and was then cut open. The boy’s remains were found in the beast’s stomach.”

This is the second time a similar case of crocodile attack was documented in the country. A few weeks ago, News 24 reported that villagers gunned down a crocodile that contained the remains of a fisherman.  Gianna Francesca Catolico /ra