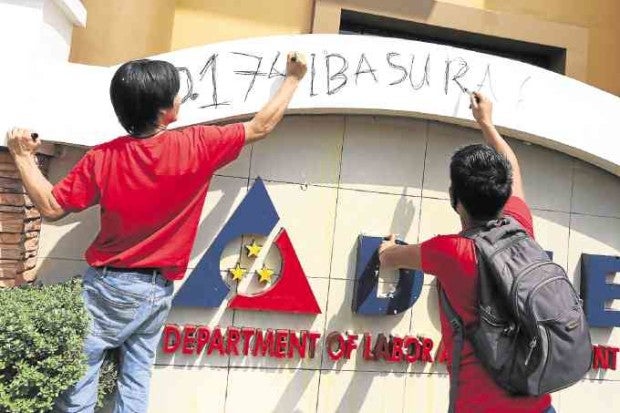 Workers vandalize the Department of Labor and Employment building’s façade to show their objection to the agency’s order against contractualization. —MARIANNE BERMUDEZ

Workers’ groups on Friday questioned the labor department’s new order banning labor-only contracting, charging that it has failed to stop the unfair practice of contractualization.

The Ecumenical Institute for Labor Education and Research pointed out that the  Department of Labor and Employment’s (Dole) new rules did not heed demands to end the practice of hiring workers and letting them go before they reach six months at work, which would automatically make them  regular employees entitled to full benefits under the law.

“The so-called win-win solution does not ban but further legitimizes contractualization. That is very far from the workers’ demand to repeal all orders and policies that allow labor contractualization,” Poras said.

But labor groups Kilusang Mayo Uno and the Partido Manggagawa protested the order as “pro-contractualization.”

Poras reiterated the group’s appeal to junk any order promoting contractual work arrangements, stressing that workers want to ban all forms of contractualization. She said she would be seeking a legislative inquiry on DO 174 when Congress resumes its session in May.

“What we want… is the regularization of workers and the passing of a national minimum wage,” she said.

The Partido Manggagawa agreed, noting that the DO 174 only reiterated prohibitions already spelled out in the old Department Order 18-A which it was meant to supersede.

“The labor secretary is vested by the Labor Code with the power to prohibit or restrict labor contracting. Why does Bello not want to exercise this authority to prohibit?” the group’s spokesperson Wilson Fortaleza asked.

“As lifetime agency employees, the best workers can hope for is a minimum wage while principal employers reap the fruits of labor productivity,” he said.

“Duterte only earned the ire of Filipino workers over his failed promises and continued implementation of antiworker policies,” Adonis said.

The KMU warned that the Duterte administration faced bigger workers’ protests against its failed promise to end contractualization. 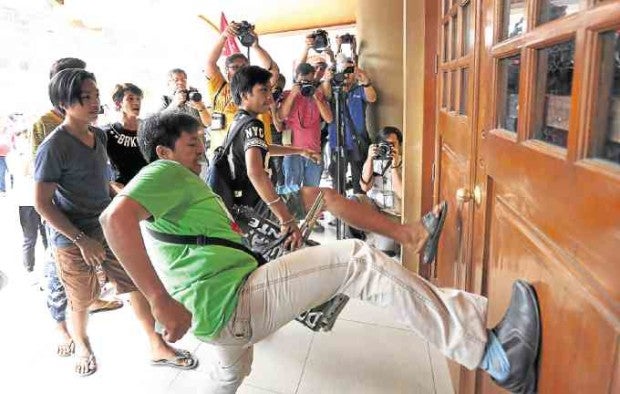 Angry protesters kick the door of the Dole office in Intramuros. —MARIANNE BERMUDEZ

But Malacañang on Friday ignored workers’ protest that argued that the watered down directive would not completely remedy job insecurity.

Presidential Spokesperson Ernesto Abella said the labor department’s order was “a fulfillment of the campaign promise of the President.”

“This is a major step in upholding and protecting the labor rights of our great Filipino workers,” Abella said in a statement.

“We guarantee the proper implementation of this Department Order by our labor officials and expect the full cooperation from the employers,” he said.

He said that workers should be allowed to enjoy the fruits of their labor, even as “business investments must be encouraged to grow and prosper.”