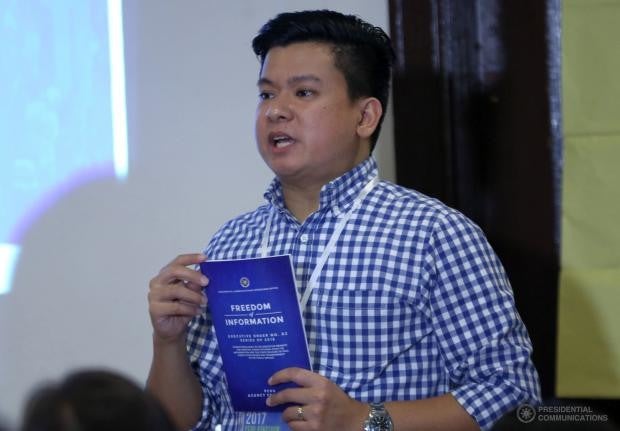 The Presidential Communications Operations Office (PCOO) would want an independent office set up to monitor the implementation of the freedom of information (FOI) bill once it had hurdled Congress.

Assistant Secretary Michel Kristian Ablan said on Friday that the creation of an overseeing body could be included in the bill during the introduction of amendments during the second hearing.

“We are trying to push with the offices of Sen. Grace Poe and Rep. Antonio Tinio for the inclusion in the FOI bill of an independent office to monitor the FOI,” Ablan said in a forum hosted on Friday by the Right to Know, Right Now coalition in Quezon City.

Ablan noted that none of the measures in Congress include the provision for a particular office to supervise the FOI requests.

The PCOO was tasked to be the lead agency in the implementation of all FOI and e-FOI programs for all government agencies in the executive branch, which are covered by the Executive Order (EO) No. 2 signed by President Rodrigo Duterte three weeks after assuming office in July.

“You cannot leave it to the agencies to simply comply with the EO,” Ablan said. “Someone has to be there to ensure that they comply with the FOI manual and have the contact information of the FOI receiving officer and decision maker (in the respective agencies).”

He noted that there are currently debates whether the proposed office should have quasijudicial power, which would allow them not only to monitor the implementation of the FOI law but also to serve as a second-level appeals office for denied requests for information.

“If an FOI request is denied internally, then they could appeal it to an independent office,” he said.

In six “FOI practice” projects done by civil society organizations, which are members of the Right to Know coalition, there was a mix of “slow-to-quick action” by the different government agencies where requests for information had been made.

The coalition, which is pressing for the FOI law, said it had filed an omnibus request for copies of the People’s FOI manuals. However, they said less than half responded positively, while other departments said they still did not have their manuals despite the supposed November 2016 deadline.

The e-FOI portal, which hosts access-to-information requests from the public, also yielded mixed results, according to a study by the coalition.

Out of 503 requested posted as of Tuesday to 64 agencies, as many as 183 requests were denied and 154 were placed on “pending or for processing.”

“At the end of the day, we still need legislation,” Ablan said. “Currently, we can only impose administrative liability… Sometimes, that is not enough.” –atm