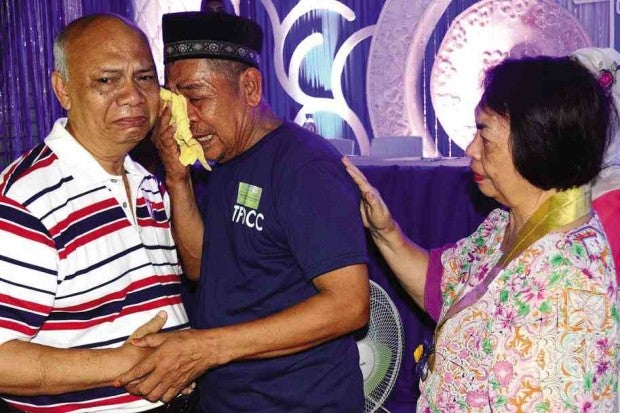 “I thought about it but I didn’t expect it to come too soon,” Palao said after Irene Santiago, Opapp project implementation chair for Bangsamoro, distributed plows, farm implements and farm animals.

“At my age, I never expected that carrying guns in the name of the struggle would end,” Polao said.

“Instead, I will be using plows and carabaos as I farm,” he said, wiping tears.

“I can now live peacefully with my family,” he said. “It’s unlike in the past when I could not tell whether I would come home alive or not,” he added.

Agriculture Undersecretary Ranibai Dilangalen said the aid was part of President Duterte’s commitment to the peace process with Moro rebels, who had agreed to an expanded autonomous region.

Santiago said the program was different from previous livelihood programs that were offered to rebels.

“We are looking at changes and these are not just giving and receiving. This is about making social change not only with the decommissioned combatants but also their communities,” Santiago said.

Foreign observers are keeping watch over the firearms.

Read Next
3 Parañaque cops in hot water after student, GF cried extortion
EDITORS' PICK
New Year, New Rediscoveries
Acer Philippines welcomes you to its first flagship store
Is your company a growth champion? Stand up and be recognized!
4 senators want military, cops off UP campuses
PUP accord with DND also faces termination
Joe Biden sworn in as 46th U.S. president, urges end to ‘uncivil war’
MOST READ
Biden says Trump wrote him ‘very generous letter’
A shade at Roque? Vice asserts being a comedian, not a clown
Trump’s parting gifts to Biden: Roaring stocks, a weaker dollar, tons of debt
Graft complaint filed vs Diokno, other BSP execs for P1.75-B contract for IDs
Don't miss out on the latest news and information.