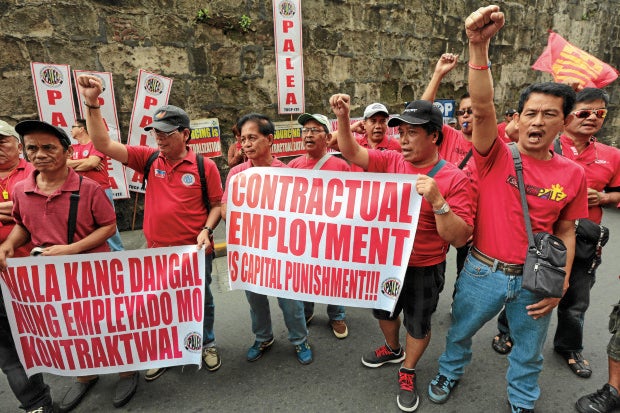 Under endo or 555 scheme, workers renew their contracts every five months so employers can avoid the obligation of paying them as regular employees, who are afforded various benefits and privileges after six months at work.

An employers group said it accepted the new order, but a labor organization rejected it, saying it was a “sad day for workers.”

Bello signed Department Order No. 174, or the Rules Implementing Articles 106-109 of the Labor Code, after months of consultations with labor and management groups.

DO 174 superseded DO 18-A, a policy earlier reviewed by the Department of Labor and Employment (Dole) following complaints that the order contained loopholes as it was oftentimes circumvented to allow various forms of contractual arrangements and end-of-contract schemes.

Bello said that as labor secretary, he had no power to prohibit all types of contractualization and fixed-term employment.

“Based on the Labor Code, as amended, I have no power to prohibit all forms of contractualization and fixed-term employment. This matter is a function of legislation. While I have quasi-legislative power, I cannot, through rules and regulations, amend or supplant existing provisions of law,” he said.

The secretary of labor could only regulate contracting and subcontracting, Bello said.

He signed the new policy despite the opposing stands of labor and management groups.

In a press briefing, Bello said the Dole would have wanted  a “consensus DO”—one that was both acceptable to, and endorsed by workers and  employers.

“But after almost nine months of dialogues, meetings and consultations, the fundamental difference between labor and employer remains,” he added.

Bello said the new DO reaffirmed the constitutional and statutory right to security of tenure of workers.

“This applies to all parties in an arrangement [in which]  employer-employee relationship exists and it reenforces the rights of workers to labor standards, self-organization, collective bargaining and security of tenure,” he said.

The new DO also shortens the validity of the certificate of registration of contractors and subcontractors from three years to two. It likewise increases the registration fee from P25,000 to P100,000.

To ensure the effective implementation of DO 174, Bello directed Undersecretaries Joel Maglunsod and Bernard Olalia to review the enforcement framework of labor laws and standards under Department Order No.131-B, Series of 2016, or the Revised Rules on Labor Laws Compliance System.

He said the department would deputize labor groups in inspecting more than 90,000 establishments targeted this year.

The new DO will take effect 15 days after its publication in major newspapers.

“We can live with it,” said Donald G. Dee, president of the Employers Confederation of the Philippines.

The Philippine Chamber of Commerce and Industry (PCCI) said it had reservations about the order, as it left some grey areas. “We would like to discuss this further,” PCCI president George T. Barcelon said.

Labor coalition Nagkaisa said the signing of the order was a sad day for workers. “This will enhance cutthroat competition among contractors bidding down salaries and benefits of their employees,” it said.

The Associated Labor Unions-Trade Union Congress of the Philippines noted that some prohibitions, such as that on labor-only contracting were already prohibited by law.

In a statement, Kilusang Mayo Uno condemned the order, which it said would further legitimize the already widespread labor contractualization in the country.