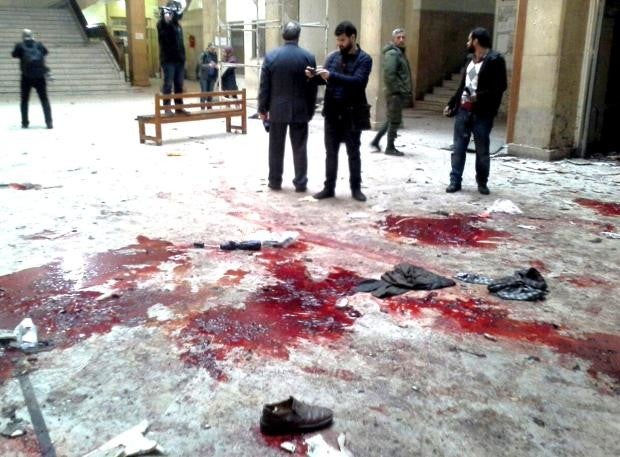 In this photo released by the Syrian official news agency SANA, journalists gather next of blood inside the main judicial building which attacked by a suicide bomber, in Damascus, Syria, Wednesday, March 15, 2017. (Photo by SANA via AP)

DAMASCUS, Syria — Suicide bombers hit the main judicial building and a restaurant in Damascus on Wednesday, killing at least 30 people, according to state media, spreading fear across Syria’s capital as the country’s civil war enters its seventh year.

The first attacker struck inside the Justice Palace, located near the famous and crowded Hamidiyeh market. The explosion left bodies lying amid pools of blood and shattered glass in the building’s main hall, adorned with a picture of President Bashar Assad hanging on one of the walls.

The official news agency, SANA, said another suicide explosion struck a restaurant in Rabweh district of Damascus, leading to multiple casualties, mostly women and children. The Ikhbariyeh TV channel said the attacker was being chased by security agents when he ran into a restaurant and detonated his explosives’ vest there.

The bombings were the latest in a spate of deadly explosions and suicide attacks targeting government-controlled areas in Syria and its capital. There was no immediate claim of responsibility for either attack, but other, similar attacks in recent weeks were claimed by al-Qaida’s affiliate in Syria.

At least 15 children and seven other civilians were killed in an airstrike on the rebel-held city of Idlib, earlier in the day, according to Civil Defense search-and-rescue group.

The group, also known as the White Helmets, said its rescuers worked all day to reach victims in the rubble.

The Britain-based Syrian Observatory for Human Rights monitoring group said 21 civilians were killed. It said the aircraft behind the attack were believed to be Russian. Syrian government aircraft are also known to fly raids over Idlib. The attack occurred in the city’s Qasour neighborhood.

The attacks came as Syrians mark the sixth anniversary of the country’s bitter civil war, which has killed more than 400,000 people and displaced millions of others. The conflict began in March 2011 as a popular uprising against Assad’s rule but quickly descended into a full-blown civil war. The chaos allowed al-Qaida and later the Islamic State group to gain a foothold in the war-torn nation.

The recent string of high profile attacks inside government-held cities may mark the start of a new insurgency campaign by al-Qaida-linked militants to try and counter recent military advances by Assad’s forces, backed by Russia and Iran.

According to Damascus police chief Mohammad Kheir Ismail, the Justice Palace attacker struck in the early afternoon — at 1.20 p.m. A man wearing a military uniform and carrying a shotgun and grenades arrived at the entrance to the palace, the police chief told state TV.

The guards stopped the man, took away his arms and tried to search him. At that point, the man hurled himself inside the building and detonated his explosives, the chief said.

Syria’s attorney general, Ahmad al-Sayed, who was in the building just a few meters away from the explosion, confirmed that account to state TV, saying that when the security guards tried to arrest the man, he threw himself inside the palace and blew himself up. He said 30 people were killed and 45 others wounded.

“This is a dirty action as people who enter the palace are innocent,” he said, noting that the timing of the explosion was planned to kill the largest number of lawyers, judges and other people who were there at the time.

Ambulances rushed to the scene to transfer casualties to hospital.

In the second attack, in Rabweh district, SANA said a suicide bomber blew himself up in a restaurant, killing several people. The Ikhbariyeh TV channel said the attacker was being chased by security agents when he rushed into a restaurant and detonated his explosives.

Wednesday’s bombings followed twin attacks on Saturday near holy shrines frequented by Shiites in Damascus that killed at least 40 people.

On Feb. 25, insurgents stormed into heavily guarded security offices in Syria’s central city of Homs, clashed with government troops and then blew themselves up, killing a senior officer and at least 31 others.

The high profile attacks were claimed by an al-Qaida-linked insurgent coalition known as the Levant Liberation Committee, formerly known as the Nusra Front.

Wednesday’s attacks also came during a new round of peace talks in the Kazakh capital of Astana. Syria’s armed opposition boycotted those talks due to what they say are ongoing government military offensives across the country.

Syria’s UN ambassador said earlier Wednesday that he was concluding his participation in the latest round in Astana, after two days of meetings without rebels. Bashar Jaafari said discussions were “constructive” but only one official paper was produced — about demining Palmyra, the historic Syrian town that pro-government forces recaptured from the Islamic State group two weeks ago.

Syrian rebels did not send any delegates to this, third round in Astana, accusing the government and Russia — one of Damascus’ main backers — of breaking cease-fire pledges and obligations to distribute humanitarian aid.

The Astana talks, brokered by Russia and Turkey, are centered on reaching a cease-fire in Syria and getting humanitarian relief to millions of suffering civilians. They run parallel to the UN-mediated political talks in Geneva aimed at ending Syria’s civil war.

Meanwhile, taking stock of six years of Syria’s civil war, the UN health agency said in Geneva on Wednesday that over half of all hospitals and public health centers in the violence-wracked country have closed or are partially functioning, and nearly two-thirds of health-care workers have fled.

The head of the World Health Organization’s emergencies program, Peter Salama, said resources to help the health care system are “stretched to the limit,” citing security threats to health care workers and a lack of access to medicines and medical equipment.

Salama called for “systematic and unhindered access” for life-saving materials like vaccines and medical supplies “on this sad anniversary of the start of war in Syria and before more lives are lost.” –Albert Aji and Zeina Karam

Karam reported from Beirut. Associated Press writers Philip Issa in Beirut and Jamey Keaten in Geneva contributed to this report.