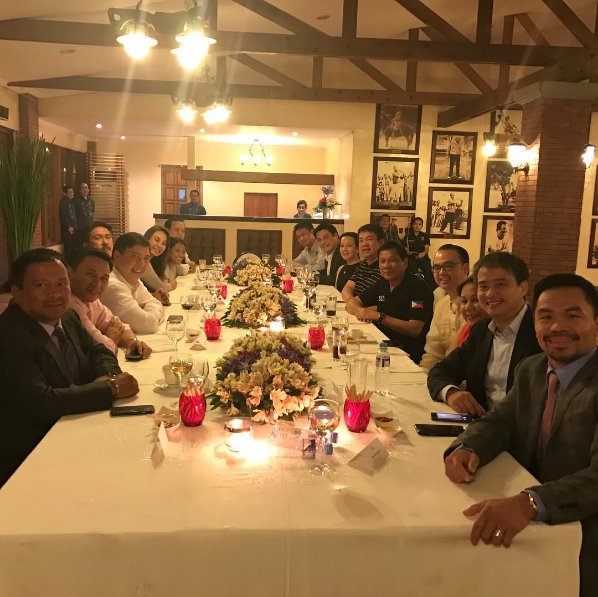 MANILA, Philippines — The night that brought President Duterte and 15 allied senators together in an intimate dinner amid the administration’s persistent talk of a destabilization plot against the Chief Executive was not a “hard sell” or a loyalty check, two lawmakers present at the meeting said Wednesday.

Senate Majority Leader Vicente Sotto III and Sen. Loren Legarda said the dinner was simply a fellowship with the President, who had not met many of them since he assumed power in July.

“We didn’t even talk about anything official.  The issue of federalism was mentioned just in passing, merely in passing. [It was] just simply a fellowship dinner,” Sotto told reporters.

Federalism is among the President’s legislative priorities.

“Probably because most of them (senators) have not broken bread with the President, not even once from July 2016,” he said.

Asked if the meeting felt like a loyalty check amid talk of a plot to oust the President, Sotto said: “I don’t think so. Ang layo (That’s far-fetched).”

Responding to the same question, Legarda said: “No. It wasn’t a hardsell. [It was] very light.”

A total of 15 members of the Senate majority bloc dined with the President Tuesday night, the eve of the final session day before Congress would go on break for Lent.

The President had come from a meeting with members of the League of Municipalities of the Philippines, an organization of local officials.

Legarda said the dinner was short, “about one and a half hours.” Topics touched on were the tax reform measure and, “a little” on federalism.

Proceedings of the Commission on Appointments, a bicameral body that approves the President’s choice for his cabinet, were not discussed either, Sotto said.

He could not say for sure who initiated the dinner.

“I don’t really know who initiated the dinner… It could have been from the Palace itself or one of the Senators who mentioned it to my secretary. It was my secretary who told me about that,” Sotto said.