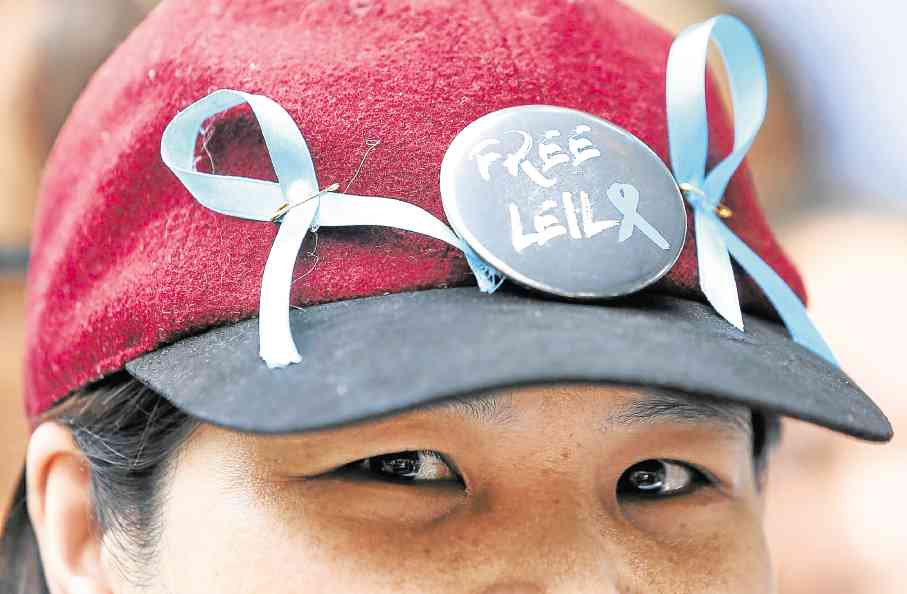 PRO-LEILA A supporter of Sen. Leila de Lima joins a rally at the Supreme Court while oral arguments are being heard on the senator’s motion to quash the illegal trafficking case filed against her. —MARIANNE BERMUDEZ

A lawyer for detained Sen. Leila de Lima on Tuesday pounced on the disagreement among government lawyers over the appropriate case that should have been lodged against her in a bid to convince the Supreme Court to nullify her arrest for alleged drug trafficking when she was justice secretary.

Former Solicitor General Florin Hilbay also questioned before the 15-member tribunal the authority of the Department of Justice (DOJ) and the Muntinlupa City Regional Trial Court (RTC) in handling the senator’s case.

De Lima, who has been speaking up against Mr. Duterte’s bloody war on drugs, has been held at the Philippine National Police Custodial Center in Camp Crame since her arrest on Feb. 24.

During the three-hour oral argument, Hilbay noted that the DOJ panel of prosecutors had indicted De Lima for trading and selling illegal drugs as defined under Section 5 of Republic Act No. 9165, more known as the Comprehensive Dangerous Drugs Act of 2002.

He said the Office of the Solicitor General (OSG) virtually contradicted the DOJ’s position when it mentioned in the comment it filed in the high court that De Lima should have been primarily charged with “conspiracy to engage in illegal drug trading” as mentioned in Section 26(b) of the law.

Hilbay, a member of the legal team that successfully defended the Philippines’ claims in the West Philippine Sea before an international arbitration court, argued that the difference in opinion between the DOJ and the OSG “palpably indicates that the government doesn’t really have a case” against the senator.

“The stunning discrepancy in the understanding of the DOJ and OSG violates (De Lima’s) constitutional right to be informed of the nature and cause of the accusation against her,” Hilbay said.

He claimed that the OSG’s position only showed that Executive Judge Juanita Guerrero of Muntinlupa RTC Branch 204 had ordered De Lima arrested “for the wrong case.”

“You can consider the OSG’s disagreement with the DOJ about the actual nature of the crime as a peremptory justification to dismiss the case,” he said.

“The world is watching, and the judgment of history and our fellow citizens is a Damocles sword that hangs over all of us. Let’s do the right thing, he added.”

Under questioning by Senior Associate Justice Antonio Carpio, Hilbay pointed out that Republic Act No. 10660, the law that amended the functions of the Sandiganbayan, clearly mandated that criminal cases brought against public officials should be tried by the antigraft court.

Citing Section 4 of the law, Hilbay said the Sandiganbayan “shall exercise exclusive original jurisdiction in all” criminal cases brought against senior government employees.

“When it says ‘exclusive,’ that means no other court can acquire (jurisdiction over the case). When its says ‘in all cases,’ that means there’s no exceptions,” Carpio said.

“So it reiterates the meaning of ‘exclusive’ with the phrase ‘in all cases?’” the magistrate asked.

To which Hilbay quickly replied, “Yes, your honor.”

But Associate Justices Presbitero Velasco and Diosdado Peralta raised technicalities concerning De Lima’s decision to bring her case to the high court, warning that she could be found guilty of forum shopping and for premature filing of the petition.

Velasco asked Hilbay why the senator sought the tribunal’s intervention instead of waiting for Guerrero’s ruling on De Lima’s motion to quash her arrest warrant.

The magistrate also noted that the Court of Appeals had already dismissed De Lima’s two petitions seeking to stop the DOJ from conducting a preliminary investigation and Guerrero from acting on the complaint filed by the DOJ prosecutors.

“In my reading, the issue of jurisdiction will have to be resolved by the RTC judge herself … Even the issues that you raised are concerned with the order issued by the judge,” Velasco said.

“You are asking this court to order dismissal of the case without waiting for the judge’s decision on the motion to quash. This is too premature in my reading,” he said.