MMDA: How about an Edsa fee? 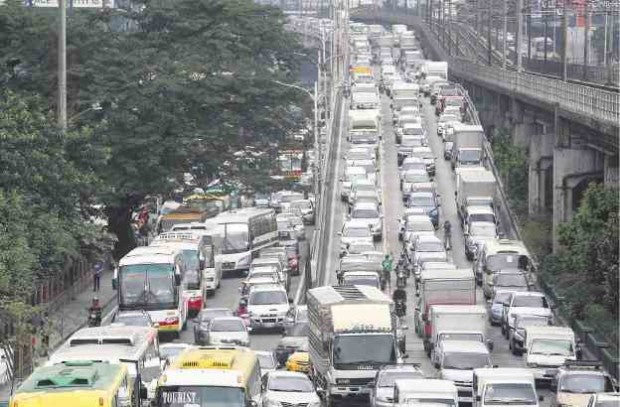 A scheme called “congestion pricing” is being studied as a way to ease traffic flow on the country’s busiest highway. —NINO JESUS ORBETA

Days after announcing that it would no longer implement the modified odd-even scheme, the Metropolitan Manila Development Authority (MMDA) said it was studying the possibility of charging a fee for every private vehicle that will use Edsa.

The agency’s chief said the study was being conducted with the help of the government of Singapore, where “congestion pricing” has been in effect since the 1970s.

Under this traffic system, which is also implemented in several major cities worldwide, private motorists must pay to pass through Edsa. The government will keep track of these motorists through state-of-the-art cameras set up on gantries.

“I think this is something we have to look at. I’m not saying we will already do it but we have to study it,” MMDA officer in charge and general manager Tim Orbos told reporters in a recent interview.

Orbos said the system was somewhat similar to the e-pass scheme being implemented on expressways where vehicles passing through toll gates would be charged electronically. The only difference is that toll gates would not be set up as this would defeat the purpose of congestion pricing, he added.

The traffic scheme has been in effect in Singapore since 1975, resulting in an “almost immediate 45-percent reduction in traffic and a 25-percent decline in vehicle crashes.”

Other major cities worldwide where it is being implemented are London, Milan and Stockholm.

Orbos said that they would have to figure out how the gantries would be set up since Edsa has various entry and exit points.

He pointed out that there was a need to have an innovative approach in reducing the volume of vehicles plying Edsa, especially since 80 percent of the roads in Metro Manila were being used by private vehicles.

“The Singapore government offered to help us. This is a government to government [project]. OK, let’s say we lack public transport but are we going to wait? This is why we have schemes whether congestion pricing, odd-even or number coding prioritizing public transport,” Orbos said.

According to latest MMDA data, about 236,000 private vehicles pass through the 24-km Edsa daily, making it the country’s busiest thoroughfare.