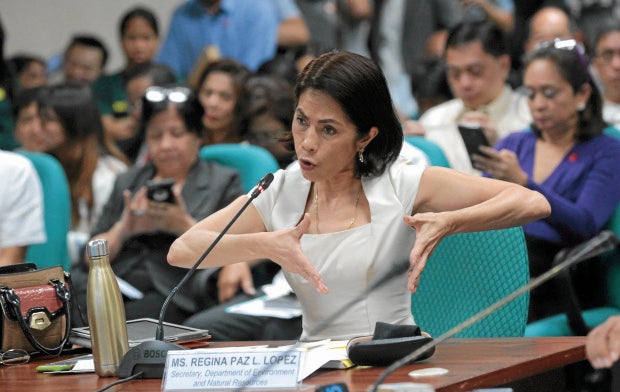 MANILA — A no-show at a congressional inquiry on her mining policies, Environment Secretary Gina Lopez did not escape a skewering from lawmakers who criticized her “highly illegal” and “whimsical” orders shutting down or suspending mines.

The embattled Lopez was abroad and could not make it to Tuesday’s hearing of the House good government and public accountability committee, but her absence did not stop the congressmen — some with their own mining interests or representing districts affected by the closure orders — from raising their grievances against her.

Surigao del Sur Rep. Johnny Pimentel, chair of the House panel, said it was clear Lopez did not follow the recommendations of her own mining audit team to penalize only erring mining companies based on their violations, and instead chose to summarily shut down operations.

“If you close down a mine, you have to lay down the reason. It’s like when a policeman arrests a person, he can’t just say ‘I will jail you,’ without saying why,” said Pimentel, whose family has been into mining for some time.

Last month, Lopez ordered 23 mines closed down and suspended five others. She also canceled 75 mineral production sharing agreements located in watersheds. This was months after an audit of mining operations had resulted in recommendations for the suspension of 20 mining projects.

At the hearing, former Mines and Geosciences Bureau head Leo Jasareno, now a consultant for the environment department, clarified that the mining companies ordered shut had all submitted appeals, effectively staying the closure.

“If a mining company files a motion for reconsideration, or appeals to the President, then her (Lopez’) decision is stayed… so no mine is closed at the moment,” he said.

“Nobody knows who the mining audit members are. I was told one of the members of the audit team is a personality coming from an NGO that is anti-mining — how can that be above board? How was the mining audit conducted? Did they go to the site? Did they bring technical people over?” he said.

He said he was neither a patron nor protector of the mining companies, but was only looking out for his constituents who would be adversely  affected by the shutdown of mine operations.

“We will lose thousands of jobs in my district. We have no other industry except mining. If you close these down, where do they go? They won’t go to you or the Secretary. They come to me,” Barbers said.  SFM/rga