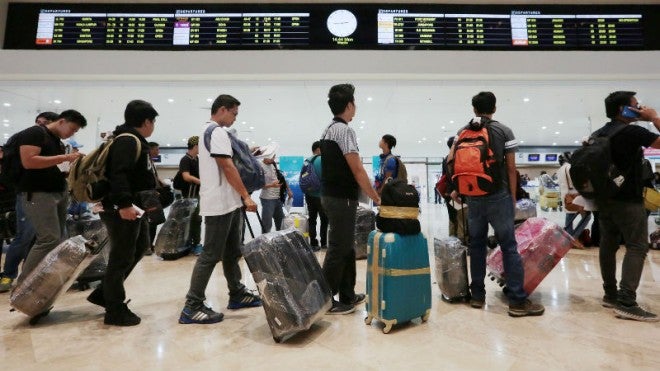 If Technical Education and Skills Development Authority (Tesda) Director General Guiling Mamondiong had his way, he would not send women abroad to work because he believed it was “another form of slavery.”

Mamondiong said the government should find ways to provide women livelihood in the country because many of them are abused as slaves abroad. Incidentally, most of Tesda’s technical-vocational graduates, including those from the Women’s Center, find work abroad because of high demand.

“Hindi bale kalalakihan sa atin mapunta sa ibang bansa, pwede naman rin mag-asawa doon. Hindi ba? Pero yung kababaihan natin dito, pinapadala sa ibang bansa para gawing alipin lamang (It’s okay for the men to go abroad, since they can marry there. Isn’t that right? But our women, they are being sent abroad to become slaves),” Mamondiong said at his agency’s memorandum of agreement with the Metropolitan Manila Development Authority on Monday, which set aside 5,000 slots for free skills and livelihood training to the family of traffic constables.

“When the women are empowered they become more powerful not just in the workplace but [also] at home. Halos wala na silang oras sa kanilang mga asawa dahil sila nga ay powerful. (They don’t have time anymore for their spouses because they are powerful),” he said.

Joms Salvador, Gabriela spokesperson, said yesterday that women would not be empowered as long as the “feudal-patriarchal” view on women, such as that shown by Mamondiong, prevailed. She claimed that this kind of perspective “consigns women as weak, treats them as commodities and denies them of their rights.”

“It’s not with men climbing up the ladder of wealth and power that will empower women, but women themselves who will take part in transforming society,” she said.

Mamondiong, a Muslim, noted that the predominantly Roman Catholic Philippines had a “problem” especially with the overwhelming number of women in the country. It was, however, unclear why he believes it is a problem, as he cited that non-Muslim men in the country are only allowed to marry once.

The Tesda official claimed that the country has a woman to man ratio of “five to one.”

The 2015 census shows an error in Mamondiong’s view of male-female ratio in the country. According to that census, there are more males aged 0 to 64 than females (1.045 males per female). However, for those 65 years old and older, there are more females than males.

A check with the Philippine Statistics Authority’s 2017 “Women and Men in the Philippines” fact sheet showed that women’s population this year is estimated at 52 million while that of men is at 52.9 million. CBB/rga