More than 1,500 children dead in two years of Yemen war—UN 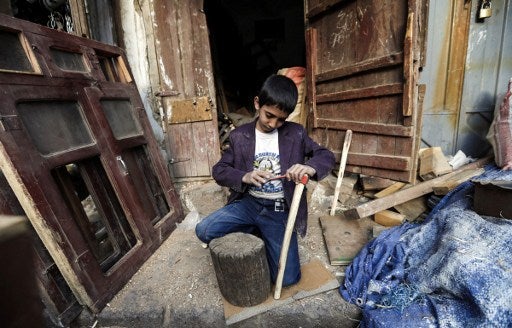 A Yemeni child sharpens an axe at a woodworking shop in a market in Sanaa’s old city on January 24, 2017.
The devastating conflict that escalated in March 2015 with a military intervention by the Saudi-led coalition to support the government, has resulted in the deterioration of humanitarian and health conditions for some 26 million Yemenis, depriving two thirds of the population of medical care while it made food scarce. According to the UN, over 7,400 people have been killed, including 1,400 children. AFP FILE PHOTO

ADEN, Yemen—The conflict in Yemen has killed nearly 7,700 people, including at least 1,564 children, since a Saudi-led coalition intervened on the government’s side two years ago, UN agencies said Monday.

The UN children’s agency Unicef said that by March 10, at least 1,546 children were killed and 2,450 others maimed in Yemen.

During that same period 1,801 boys and 649 girls were wounded while 1,572 boys were recruited to serve as child soldiers, said Unicef.

In March 2015, a Saudi-led Arab coalition mounted an air campaign in support of President Abedrabbo Mansour Hadi whose authority was being challenged by Shiite Huthi rebels.

The rebels overran the capital Sanaa in September 2014 forcing Hadi to seek first refuge in the southern city of Aden and then exile in Saudi Arabia.

Loyalists backed by the Saudi-led coalition have driven the rebels out of five southern provinces which they had seized, including Aden, in the summer of 2015.

The UN’s World Health Organization said the conflict has killed nearly 7,700 people and wounded more than 42,550 since the coalition intervened.