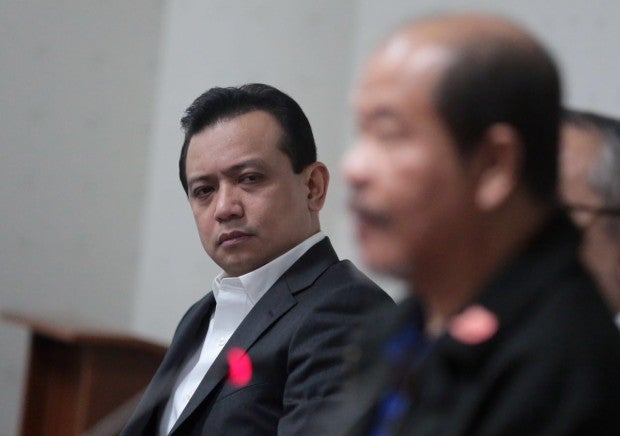 Sen. Antonio Trillanes listens to SPO3 Arturo Lascañas as he faces the media and admitted the existence of the Davao Death Squad during a press conference at the senate on Monday, February 20, 2017. Inquirer photo/Grig C. Montegrande

Two senators on Monday dismissed allegations that retired SPO3 Arturo Lascañas was being used by his handlers to destabilize the Duterte administration.

The police say 2,500 were killed in police operations where drug suspects allegedly violently resisted arrest. Another 3,600 have been classified as deaths under investigation. More than 900 have been investigated and concluded.

It was Trillanes who facilitated the press conference of Lacscañas last February 20 where the latter claimed the existence of the so-called Davao Death Squad (DDS). The confessed DDS leader also claimed that President Rodrigo Duterte paid the group to kill people when he was still mayor of Davao.

Lascañas contradicted his sworn testimony before the Senate committee on justice and human rights last October 3 where he denied the existence of the death squad.

On Trillanes’ motion, the Senate committee on public order and dangerous drug, chaired by Senator Panfilo Lacson, held a hearing on Lascañas’ new allegations but terminated the proceeding after only one hearing when no one objected to its adjournment.

Senator Francis “Kiko” Pangilinan, president of the Liberal Party, believes that the hearing should be reopened if more witnesses surface and corroborate Lascañas’ allegations.

Trillanes and Pangilinan are members of the Senate minority bloc.

In several media interviews over the weekend, Lacson said Lascañas was only being used to destabilize the administration of President Rodrigo Duterte. CBB/rga