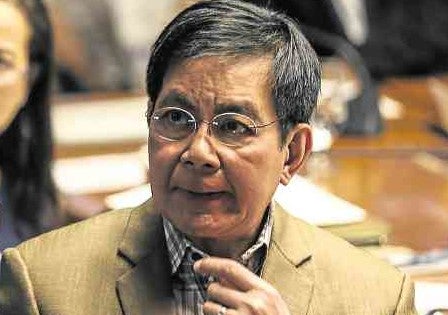 Two Senate committees have warned President Rodrigo Duterte against “micromanaging” the Philippine National Police (PNP) after his move to recall a relief order on a group of Leyte policemen allegedly resulted in the officers killing Mayor Rolando Espinosa Sr. of Albuera, Leyte province, in November last year, purportedly to cover up their involvement in illegal drug activities.

The committee on public order and dangerous drugs, led by Sen. Panfilo Lacson, and the committee on justice and human rights, led by Sen. Richard Gordon, said Supt. Marvin Marcos and his men from the Criminal Investigative and Detection Group-Region 8 (CIDG-8) “could have been prevented from doing their dastardly deed” had they been relieved a month before they “silenced” Espinosa.

But the two panels stated that the Oct. 15, 2016, relief order issued by PNP Director General Ronald dela Rosa on Marcos and his men was rescinded that same day by Mr. Duterte.

Espinosa and another inmate, Raul Yap, were shot dead allegedly by Marcos’ men inside the Baybay City subprovincial jail in a predawn operation on Nov. 5, 2016.

Confessed drug distributor Kerwin Espinosa, the mayor’s son, had testified in the Senate that some members of Marcos’ raiding team had been under his payroll.

“The committees are of the opinion that the President should not be micromanaging the affairs of the government and should place his trust in the sound discretion of all his appointees, including PNP Chief Dela Rosa,” they said in a 34-page report to the Senate on March 7 for plenary approval. The report was later posted on the Senate website.

The report said Marcos and his men were involved in the “premeditated” killing of Mayor Espinosa and were guilty of abuse of authority.

The committees said Dela Rosa should be given “full authority and control on how he will manage the day-to-day affairs of the organization.”

“He should be given a free hand to decide on how to run the PNP and his decisions should be recognized and respected and should be countermanded or reversed only by the Chief Executive in case of a clear showing of grave abuse of discretion,” the report said.

“The committees strongly condemn the killing of Mayor Rolando Espinosa and Raul Yap. Though they have committed violations of our existing laws, the same is to be determined by our courts. Granting that certain freedoms are denied to detainees, including their right to privacy, they are still entitled to the fundamental right to life as guaranteed by the Constitution,” it said.

The committees said Espinosa was silenced by “individuals who wanted their participation concealed” and that they happened to have access and means to kill Espinosa “through abuse of their authority.”

“They thought they could do away with Espinosa by feigning a legitimate operation,” they said.

The senators noted the use of “overwhelming force” by authorities serving the search warrants on Espinosa and Yap on that day, with Marcos bringing in 18 CIDG men and six members of the Regional Maritime Unit as “perimeter defense.”

They rejected the explanation of Marcos that they needed such force, noting that Marcos did not even inform his superiors, Region 8 director Chief Supt. Elmer Beltejar and CIDG Director Roel Obusan, about the raid on the cells of Espinosa and Yap.

The committees also found it “peculiar” that aside from the CIDG men, “nobody was able to witness what transpired in Cells 1 and 7.”

They found “appalling” that jail guards and police personnel tasked with ensuring Espinosa’s safety were “disarmed and made to kneel down and face the wall” by the CIDG men during their raid.

“That fact alone merits strong denouncement and condemnation as it disrespects and disregards the authority of the jail guards and police officers present, who are supposed to be accorded with respect as fellow public servants,” the report said.

The committees also did not give credence to the deposition of Paul Olendan, whom the CIDG men said was their informant, that Mayor Espinosa had drugs and firearms in his cell.

Olendan was on his workplace at the time he was supposed to be inside the Baybay jail, which was 100 km away. Olendan had gone missing when the Senate started its hearings on Espinosa’s killing.

The senators said they were convinced that Espinosa and Yap had no firearms and illegal drugs in their possession.

They noted that a few days before the raid, a thorough search of the cells was done and guards only found cell phones and chargers in Espinosa’s possession.

Not only did they plant evidence at the cells of Mayor Espinosa and Yap, but Marcos and his men also took the hard drive of the CCTV cameras in the jail, according to the report, pointing out that jail guards had attested that the cameras were functioning on the day of the raid.

The report said that Kerwin Espinosa had stated during the Senate hearing that Chief Insp. Leo Laraga (who shot Rolando Espinosa) and Supt. Santi Noel Matira had been on his payroll.

It said this “gives sense to all that has happened and explains why Espinosa was murdered.”

The committees urged the Department of Justice to expedite its preliminary investigation of Espinosa’s killing since a multiple murder complaint was filed against Marcos and his men by the National Bureau of Investigation as early as Dec. 7, 2016.

“Considering the time, not to mention the overwhelming testimonial and documentary evidence presented before the five-man panel conducting the preliminary investigation, they should have already resolved this matter with urgency,” the report said.

The committees also asked the Supreme Court to expedite its determination “as to the propriety and liabilities or sanctions, if any” of Judge Carlos Arguelles (for failing to act on Mayor Espinosa’s motion to be transferred to a safer facility); Judge Arcelo Sabarre Jr., of RTC Branch 30 Basey, Samar, and Judge Janet Cabalona of RTC Branch 33 Basey, Samar, (for issuing search warrants upon persons detained in a government detention facility outside and his and her courts’ jurisdiction.)