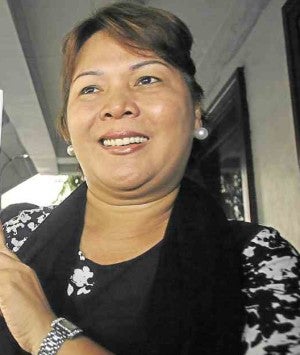 Although she may still get a Cabinet post despite her recent bad behavior, Sandra Cam would have to reckon with the powerful Commission on Appointments (CA) when the time comes.

This was the opinion expressed by Sen. Panfilo Lacson on Sunday as he said that Cam was wrong to berate two airport personnel when she was not accorded the VIP treatment reserved for government officials.

But detained Sen. Leila de Lima said the former jueteng whistle-blower did not deserve a Cabinet post, referring to her as “this evil of a woman” who should be exposed, prosecuted and jailed for “certain nefarious activities.”

Cam was strongly criticized by netizens over a Feb.16 incident in which she blew her top when an employee of the Ninoy Aquino International Airport and the latter’s manager failed to recognize her and treat her like a VIP.

She also gave the employee a tongue-lashing laced with curses and dropped the name of Special Assistant to the President Christopher “Bong” Go, saying she was going to be appointed to a government post in three months.

Despite this, President Duterte said on Saturday he was willing to offer Cam a government post in return for her help in his campaign. But he added there was currently no vacancy in the Cabinet.

In a radio interview, Lacson said that Cam was wrong for treating airport personnel that way.

He added that he would tell Cam the same thing should he see her. Cam was his witness when he conducted a Senate inquiry into jueteng operations during the term of President Gloria Macapagal-Arroyo.

Lacson, however, said it was the prerogative of the President to give a Cabinet position to Cam although he noted that the CA has the power to scrutinize Mr. Duterte’s nominees.

“The check and balance under our system of government is lodged at the CA. If and when the time comes for Cam to face the scrutiny of the commission, she will have to explain what transpired at the Naia as reported in the media,” Lacson said in a text message.

Cam earlier referred to the report about her as a “grand plan by the Liberal Party to destroy those closest to the Duterte administration.”

De Lima, on the other hand, attributed Cam’s bad behavior to the latter’s “special relationship” with the President.

In a handwritten note released by her office, De Lima said Cam had played a major role in the “massive demolition” job against her which included “harassment, coercion and blackmailing of so-called witnesses and prospective witnesses.” “Because of that ‘special” relationship with the tyrant, [Cam] thinks and acts like she is untouchable,” she added.