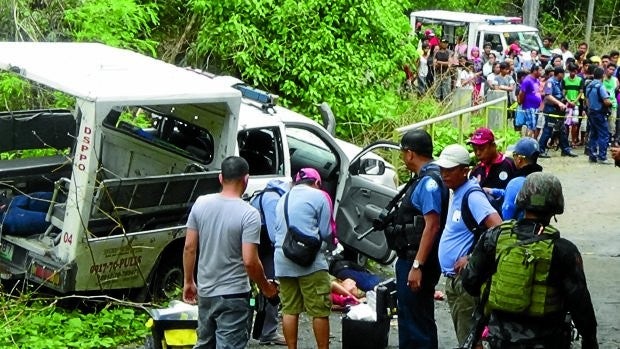 Authorities examine the scene in Barangay Sibayan, Bansalan town, in Davao del Sur, where four policemen were killed and another was wounded in an ambush. MARLON GAYOG/CONTRIBUTOR

DAVAO CITY—Communist rebels owned up to the attack on a police team in Bansalan, Davao del Sur, that killed four officers and wounded another, saying the policemen died fighting and were not victims of an overkill as top officials, led by President Rodrigo Duterte, would like the people to believe.

In a statement, Rigoberto Sanchez, spokesperson of the New People’s Army’s (NPA) Southern Mindanao Command, said the NPA had asked the policemen to surrender after the first volley of fire, but they continued to shoot at the rebels.

The rebels had cornered the policemen in the village of Sibayan in Bansalan and were given the chance to yield peacefully, Sanchez said.

“The NPA commander called for the enemy troops to surrender and lay down their arms after the initial five-second volley of gunshots,” the statement said.

The policemen, however, “returned fire.” “A wounded police officer jumped off the vehicle. It took 10 minutes of exchange of fire before the NPA squad succeeded in subduing the PNP unit and cautiously approached the PNP vehicle,” said the statement.

Sanchez said the NPA Mt. Apo command carried out the ambush, a few hours after it executed a former soldier, Marlon Lomantas, who had been spying on the rebels. NPA executed Lomantas at 2 a.m. on Wednesday, the statement said, tagging Lomantas as a drug pusher, too.

Sanchez said rebels had anticipated the arrival of government forces in the village after the execution of Lomantas.

When a police vehicle passed, rebels did not open fire because there were civilians in motorcycles running alongside the police vehicle, Sanchez said.

PNP Director General Ronald “Bato” dela Rosa claimed the policemen who were attacked were in the area to investigate the killing of Lomantas and were noncombatants.

The slain policemen included members of Scene of the Crime Operatives (Soco), the police forensics agency.

Sought for an expert opinion, a veteran investigator of the National Bureau of Investigation said he was shown footage of the crime scene and quickly detected signs of an overkill.

“The shots are telling,” said the investigator, who asked that he not be identified. “They were executed,” he said, basing his opinion on the footage that was shown him. —ALLAN NAWAL