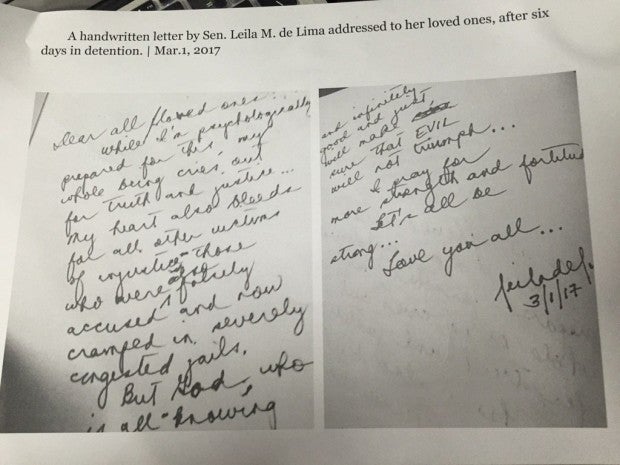 Facing an indefinite detention over drug charges filed against her by the Duterte administration, De Lima has been issuing daily dispatches from her cell at the Philippine National Police Custodial Center in Camp Crame, Quezon City.

Her handwritten notes have become an outlet of sorts for her thoughts and emotions. “Indeed, I cannot be silenced,” she said.

De Lima is facing trial for the alleged proliferation of illegal drugs at New Bilibid Prison when she was justice secretary. She has repeatedly denied the charges, attributing her legal woes to the “vengeful” President Duterte.

“The regular issuance of dispatches and messages comes a long way in terms of expressing my thoughts on burning issues and my innermost feelings about my current situation,” said De Lima in a handwritten response to the Inquirer’s questions sent through her staff.

“It helps a lot because I need to keep my mind busy in between reading books and praying. There shouldn’t be any space for negative sentiments like depression and anger,” said the senator.

De Lima is limited to using pen and paper as she is not allowed to use any electronic gadget or communication device while in detention.

Her staff dutifully shares her notes on her official Facebook account. Over the past two weeks, she has released several handwritten notes on issues such as the death penalty bill and her thoughts about her family.

In a note written on March 7, De Lima spoke about her late father, former Commission on Elections Commissioner Vicente de Lima, whom she credits for her strength.

“The molding of my character, personality and values was largely (due to) my father’s labor. Did he have the foresight that his eldest daughter would be going through life’s trials of this proportion?” she wrote.

“The answer seems obvious to me. And I only thank my dear Dad for such gift of foresight and his perseverance in instilling in me an unbreakable fiery spirit,” she added.

“Their perpetual innocence and purity in spirit insulate them from cruelty and irrationality of humankind. They have a world of their own, which I imagine is one free of pretensions and bitterness,” De Lima said.

“I draw much strength from Israel and Brandon, my angels,” she said. On the early morning of March 10, she wrote: “Mind over matter. Waiting … Trusting … Hoping … These are my silent mantra in detention.”

In a letter to the Inquirer, De Lima said: “I can only see the positive side of this unbelievable ordeal—a welcome respite from the attacks and turbulence I went through (and continue to go through) for eight months under this evil regime,” she said.

Apart from writing, De Lima is reading books, including the one given by former President Benigno Aquino III titled, “The Rise and Fall of the Third Reich,” by William Shirer.

“My clear conscience made me embrace my current solitary life. And I leave it to the good Lord when my vindication would set in. I long for my freedom but most of all, I long for deliverance of our country from evil,” she said.

Read Next
Death toll in Guatemala fire rises to 38 girls
EDITORS' PICK
Metro Manila now at moderate risk for COVID-19 — DOH
Pagasa: Storm Luis to exit PAR by Thursday
Peeking inside the superb night camera features of the vivo V25 series
House energy committee chair Arroyo bats for cheap electricity
POGOs not linked to Illegal online gaming, says Pagcor
Do all the things you do, faster
MOST READ
Remulla lambasts ICC chief prosecutor
Jean Garcia’s son Kotaro catches social media attention for being a V look-alike
Gov’t presses start to roll for 92 million ballots
Maxene Magalona on being asked why she has no kids: ‘It’s awkward, invasive, a bit rude’
Don't miss out on the latest news and information.