‘Killers robbed me of the chance to know my son’ 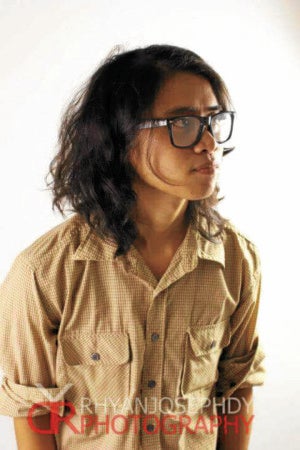 The slain Australia-based photographer, Abigail Gino Basas, was buried on Saturday, leaving behind pictures he took of the South Pacific, among other photos. The portrait above is by his best friend, Rhyan Joseph Dy.

For the people who knew and loved Abigail Gino Basas, his brutal death cut short a life filled with so much potential.

The 28-year-old Basas was laid to rest at Himlayang Pilipino in Quezon City on Saturday, exactly a week after he  was mauled to death by a group of college students he encountered in a bar.

A large crowd of family and friends turned up in white shirts bearing his image, holding up banners demanding justice.

For Gino’s parents, losing their only child to senseless violence was a nightmare they never thought they would be forced to live.

“The last time I spoke to him was over the phone, hours before he went to the bar where it happened,” his mother Gina told the Inquirer. “I asked him to buy me some bread, and he told me he would be meeting his friends right after.”

A photographer based in Australia, Gino came home in February for a vacation completing a six-month contract aboard the luxury cruise ship Pacific Aria. He was bound to return abroad after his employers, impressed with his work, expressed an intent to renew his contract.

But it all came to an abrupt end in the early hours of March 4, when Basas bumped into Mohammad Piti-Ilan inside Perfect Spot Bar and Billiards in Scout Dr. Lazcano Street. An angered and apparently drunk Piti-Ilan called for his group, numbering about 10 people, and soon they were taking turns beating up Basas in a vacant lot nearby, landing a fatal blow to his head. 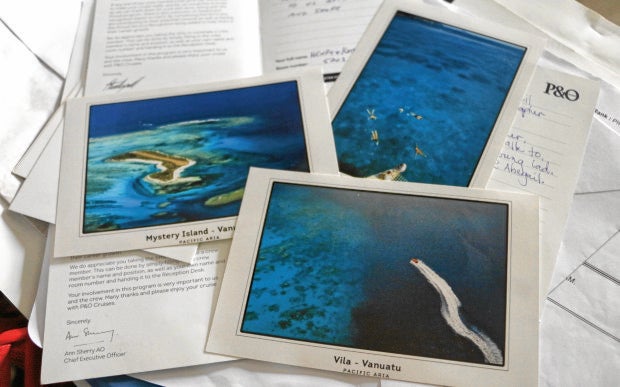 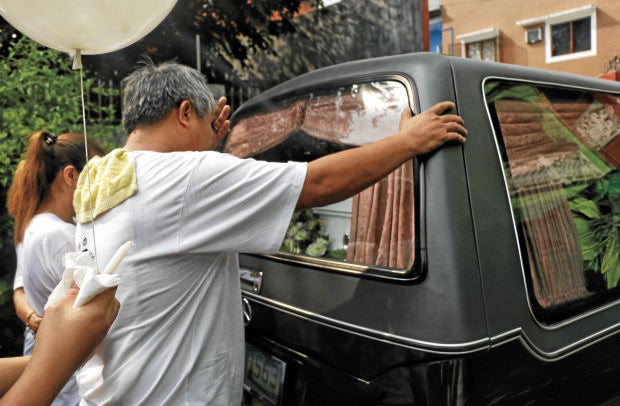 For the people in his life, Gino was one talented chap. Outside photography, he played guitar and drums for a rock band, expressed himself as an occasional graffiti artist, while skateboarding on the side.

His life’s impact showed on the last night of his wake, when hundreds of people—his gradeschool classmates, college friends, photography buddies, fellow musicians—showed up, packing the house and spilling onto the next street, abuzz with memories of Gino.

He was always the jolly one in the group, they said, and never the first to pick a fight. His lighthearted nature allowed him to make friends everywhere he went.

But Gino’s art fully showed through the camera. His portfolio ranged from portraits and wedding shots, to his work aboard the cruise ship where he captured the crystal blue waters near Papua New Guinea and Vanuatu.

“Thank you” cards from cruise passengers expressed how much they appreciated his professionalism and good nature.

Of his equipment, Gino treasured an entry-level Nikon D60 the most—a Christmas gift from mom when he was just a 19-year-old dabbler.

“I thought photography was just his hobby, until he finally made it a profession,” Gina said. “He didn’t have a favorite subject, he would take photos of everything. I would post his work on Facebook and say MYMP—make your mama proud.”

A week after his killing, not one perpetrator has been arrested. The Quezon City Police District, however, will be filing murder complaints this week against the suspects led by Piti-Ilan, a student of National University in Manila.

The other suspects were identified as Cyril Angelo Rada and Earl Brian Grande of University of the East-Manila, Jameel Haron Benito of STI-Manila, and Angelo Mark Morata.

Gino’s father Agapito, who burst into tears as pall bearers carried his son to the church, said he would not stop until justice is served.

“I will not let them get away with what they did to my son…I will not accept any money. They took him away so easily,’’ said Agapito, whose nickname “Big” partly formed his son’s name Abigail.

“It’s just now that I finally learned that Gino was really an artist,’’ she said, looking at his photos of the South Pacific. “And the killers robbed me of the chance to know my son.” 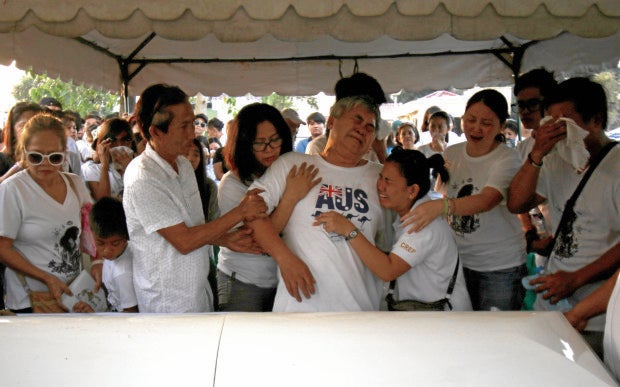 The family and friends of Abigail Gino Basas bury the 28-year-old overseas worker at Himlayang Pilipino in Quezon City on Saturday, one week after he was mauled to death by a group of college students he encountered in a bar. Photos by Richard Reyes 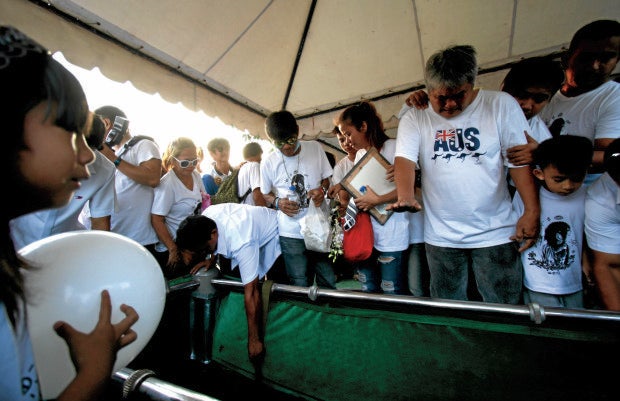 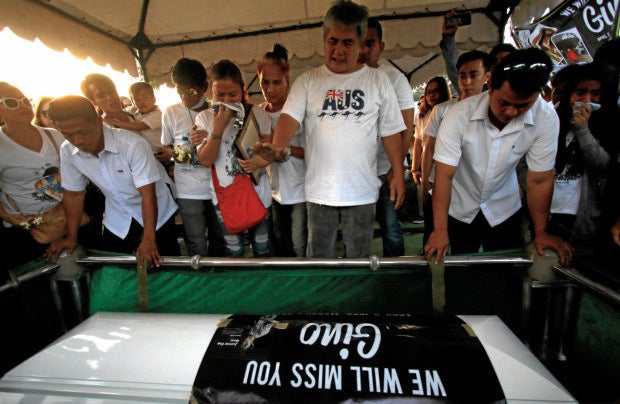