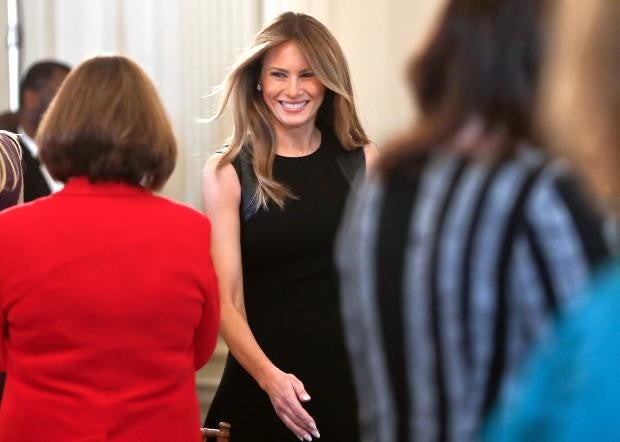 In this photo, taken March 8, 2017, first lady Melania Trump arrives in the State Dining room of the White House in Washington, where she hosted a luncheon on International Women’s Day. Being first lady of the United States likely was not a life goal that Melania Trump considered while growing up in her native Slovenia. But after weeks out of the public eye following Donald Trump’s swearing-in as president, she has begun to embrace her new, more public role. (Photo by PABLO MARTINEZ MONSIVAIS/AP)

WASHINGTON, DC — Melania Trump’s invitation for high-powered women to join her at the White House was about more than the lunch they would eat, or the stated purpose of honoring International Women’s Day.

It marked a “coming out” for the first lady, seven weeks into Presidential Donald Trump’s administration. After spending a couple of weeks hunkered down at the family’s midtown Manhattan penthouse while Trump launched his presidency in Washington, the former model whose husband says is a “very private person,” is taking her first steps into her very public new role.

Mrs. Trump strode into the State Dining Room for her first solo White House event after an announcer intoned, “Ladies and gentlemen, the first lady of the United States, Melania Trump,” and was greeted by the all-female group of about 50 people, including ambassadors, Cabinet members, at least one U.S. senator and stepdaughter Ivanka Trump.

Mrs. Trump asked guests for suggestions on how best to empower women and girls worldwide, possibly foreshadowing women’s empowerment as an issue she would pursue as first lady. Trump said recently that his wife, who turns 47 next month, feels strongly about “women’s difficulties.”

“I will work alongside you in ensuring that the gender of one’s birth does not determine one’s treatment in society,” she told guests, according to a tweet by a White House official.

The White House allowed a small pool of journalists to watch as guests and the first lady arrived for Wednesday’s lunch, but they were ushered out as Mrs. Trump began to speak. The White House press office promised to distribute text of her prepared remarks after the event, but a transcript has not been released.

In recent weeks, Mrs. Trump helped plan their first big White House social event, an annual, black-tie dinner for the nation’s governors. She followed up with a trip the next day to Mount Vernon, George Washington’s estate in Virginia, where she was hosted by the governors’ spouses.

The first lady has made other quiet appearances, watching her husband sign legislation and executive orders, and accompanying him to the Capitol for a speech to Congress.

She took her counterparts from Japan and Israel on cultural outings and quickly learned the burden of new scrutiny and protocol when she was criticized for not being at the White House to greet the Japanese prime minister’s wife. Instead, Mrs. Trump met the president and Shinzo Abe and his wife, Akie, at Joint Base Andrews in Maryland for an Air Force One flight to Florida. Trump treated Abe to a weekend at Trump’s estate in Palm Beach, Florida. Melania Trump then took Akie Abe to tour a nearby Japanese garden.

“We see her physical presence,” said Jean Harris, professor of political science and women’s studies at the University of Scranton in Pennsylvania.

All first ladies go through an adjustment period as they figure out how to handle one of the most unforgiving roles in American political life. Unlike many of Mrs. Trump’s predecessors, who were politically experienced through marriage to governors or members of Congress, she is married to a lifelong businessman who never held elective office until he became president.

Complicating her White House launch is the couple’s decision for the first lady to continue living at Trump Tower until their 10-year-old son, Barron, finishes the school year. She’s not expected to live full time at the White House for at least several more months, leaving Trump largely on his own and without a traditional source of moral support.

Mrs. Trump has also been slow to staff the East Wing of the White House, where the first lady’s office is based. She so far has named only a social secretary and a chief of staff. The president has said he doesn’t want to fill hundreds of government vacancies because they are “unnecessary,” which could include the East Wing.

And the slow pace of building her staff could be complicating operations.

It’s customary for the White House Visitors Office to close temporarily during a change in administration since political appointees do the work. But this year’s shutdown lasted longer than usual, frustrating members of Congress who are responsible for distributing White House public tour tickets to constituents. Tours resumed earlier this week after a more than six-week pause.

Speculation about whether the Trumps would continue the annual Easter Egg Roll on the South Lawn had been mounting until they announced this week that it will be held on April 17.

The first lady’s popularity has risen 16 percentage points since the Jan. 20 inauguration, according to recent polling by CNN, climbing to 52 percent, from 36 percent.

Kate Andersen Brower, author of “First Women,” said the public sees Mrs. Trump as a calming force and as someone who has embraced being a mother.

“She’s really the polar opposite of him,” she said, noting that the first lady barely tweets, unlike her husband’s daily Twitter habit. Mrs. Trump also hadn’t been seen in public for several weeks after the inauguration, whereas the president appears on camera most days of the week.

“I think most people find it endearing that she doesn’t crave the spotlight in a way that he clearly does,” Brower said.

Harris said the public is giving Mrs. Trump “a little bit of a honeymoon period” but predicted the mood will change if she doesn’t move to the White House. –Darlene Superville