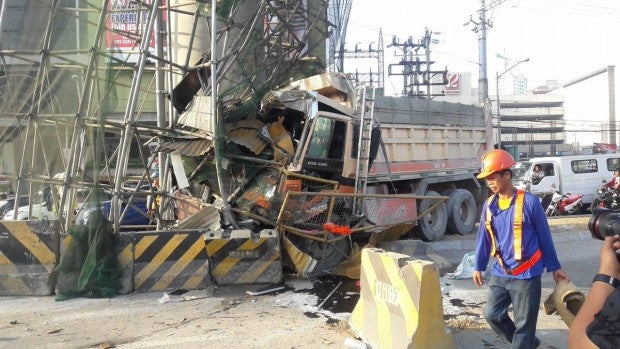 One person died and two were injured when a dump truck slammed into a concrete post along Marcos Highway in Marikina on Friday.

According to witnesses interviewed by Radyo Inquirer, the dump truck was racing with a car on the eastbound lane of Marcos Highway going to Masinag before it hit a post at an ongoing construction for the Light Rail Transit-2 extension.

One of the truck’s passengers died during the accident, while the driver and the construction’s security guard were injured.

The accident happened at dawn but it took a while before the body was removed from the truck.

The accident also caused a massive traffic congestion in the area because the truck could not immediately be removed. A radio report said authorities had to dismantle the scaffolding hit by the dump truck.

The Metro Manila Development Authority (MMDA) said that the truck was removed from the scene by 1:37 p.m.

The MMDA said although all lanes are now passable, motorists should still avoid Marcos Highway and take alternate routes.

For those traveling westbound, the MMDA said motorists can take any of the following routes:

Reports said that there is still traffic in the area. IDL/rga