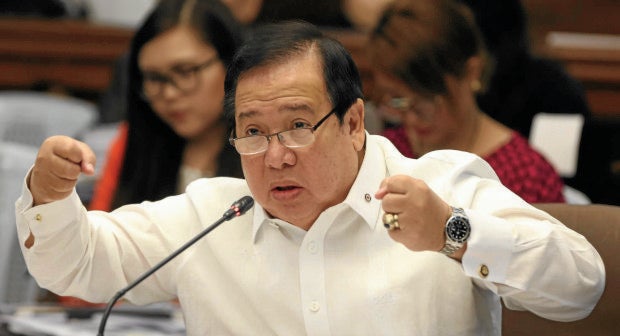 The controversy that hit the Bureau of Immigration (BI) was a case of extortion and not bribery, Sen. Richard Gordon said on Thursday as his Senate blue ribbon committee ended its inquiry after five hearings.

Gordon, the chair of the committee, cleared Justice Secretary Vitaliano Aguirre II from any involvement in the P50-million extortion on casino mogul Jack Lam in exchange for the release of 1,316 Chinese nationals arrested by the BI for illegally working in the hotel and casino owned by Lam in Clark, Pampanga province.

Gordon said that while he did not see Lam being liable, he could be answerable to the labor department for the Chinese nationals working for him without the proper documents.

According to Gordon, what was clear was that sacked BI Associate Commissioners Al Argosino and Michael Robles were caught in a video footage inside a hotel in Pasay City showing they were waiting for the payoff.

“They were waiting. They were following the scent of the money,” Gordon told reporters at a press conference shortly after he closed his five-hour hearing.

The two waited for seven to eight hours in the City of Dreams as Lam’s middleman, Wally Sombero,  collected P50 million and handed the cash to them in bags.

They could not explain their movements,  Gordon said.

He said that Argosino and Robles, who were already facing graft complaints in the Office of the Ombudsman, could be liable for “malfeasance.”

Gordon said this could also be the case for BI chief Jaime Morente and former BI intelligence chief Charles Calima.

He said both men hid evidence of the extorted money.

Calima kept the P18 million that he got from Argosino for a few days before turning it over to authorities, Gordon said.

Gordon said he had “no proof” that Aguirre was involved.

“As a lawyer, I don’t think I was able to prove anything against Aguirre,” he said.

He said the justice secretary acted on the extortion by first firing Calima and then reporting to the Palace for the removal of Argosino and Robles.

Told about Sen. Antonio Trillanes raising the possibility that Aguirre was involved in the “shakedown” on Lam as proven by the fact that Sombero was dealing with Argosino who had no power to release the Chinese workers, Gordon said the hearings did not show this at all.

He dismissed suggestions of impropriety in Aguirre’s meeting with Lam at a hotel last Nov. 26.

“(Lam) is an investor in the country. He has the right to say, ‘You arrested my people. Please help me because my business will be affected,’” the senator said.

He also said Lam and Aguirre met in a public place.

What became a problem was that Argosino inserted himself in their meeting, Gordon said.

Pressed on the liability of Lam, on whether he bribed the BI officials through Sombero, Gordon said this was not proven and added the casino tycoon was not at the hotel where Argosino and Robles took the money.

He also said it was not Lam but casino operators who shelled out the money for the two BI officials.

Asked about Sombero’s liability, Gordon said Sombero did not bribe the BI officials and saw the latter’s role as one who tried to fix the problem and “make money from both sides.”